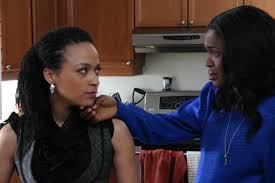 The topic of migration offers itself in any interesting conversation, especially for Nigerians. We seem to think that the better life is somewhere else but home. We have heard crazy stories of Nigerians leaving the country using very funny tactics.

Joyce Unanga (Omoni Oboli) and Paul Unanga (Sam Sarpong) are illegal immigrants in the United States of America. With an expired visa, Paul convinces Joyce to stay back in the states with him until their child is born. She is six months pregnant and he wants them to leave when their child is born. Which should automatically make the child a US citizen by birth. They live an uncomfortable life as a result of their choices, they have to hide from the law enforcement agencies to avoid deportation. When the immigration officers invade Pauls’ work place eventually, they arrest him and with Paul in their custody and on the verge of being deported, Joyce is left to struggle until the child is born. Eventually, she meets Susan (Teri Oliver) a helpful American citizen that gives her a place to stay.

Omoni Brings Joyce to Life with a Spectacular Performance; Her Best Yet.

It is a habit for some Nigerians to travel abroad to have their children. Most people claim it is because of our poor health care system but in truth, they want the child to be an American citizen by birth. A lot comes as a result of that, the child is able to access many opportunities and is able to live that American dream. We have heard of a woman that forcefully gave birth on the plane while being deported just because she wanted her child to be an American citizen- the struggle is real!

This ‘struggle’ is what the director needed a capable actress to bring to life and Omoni does a spectacular job being Joyce. We see a woman that is unsure of taking a decision. She is caught between what she wants and what her husband wants her to do and what we see is a frustrated but hopeful woman.

Omoni makes a great effort with a fantastic script. Anchor baby is a wonderful film.

Omoni Oboli is the centre of the work and she takes us on a journey, we sympathize as well as question her choices. At some point, I asked “why doesn’t she just come back home”, she is the pregnant one not her husband and pregnancy comes with its own challenge, her husband must have been oblivious of that.

The Production Elements are Great!

Anchor baby is not just a film with a great story and a great lead actress. It also features great production elements. The sound is great. The cinematography is excellent.

Anchor baby is the best film I’ve seen of Omoni Oboli and I’ve watched most of her productions. The depth and warmth that comes with watching this production is different from anything else she has done. It is such a great effort.

Previous Post Short Films Are Easy To Watch; They Are on YouTube! Check Out The Best Shorts We Have Seen