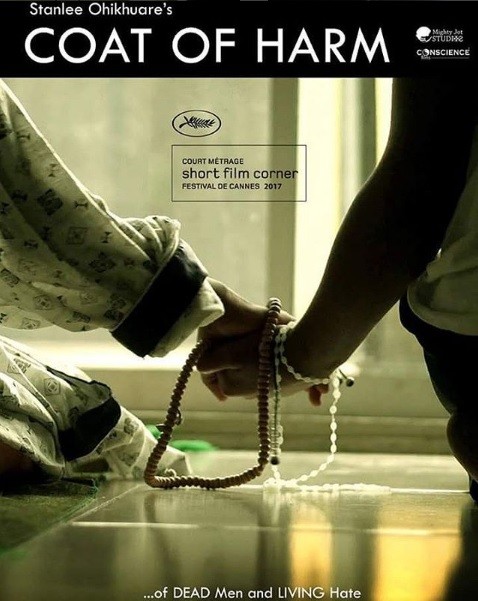 Stanlee Ohikhuare’s Coat of Harm has been scheduled to screen and premiere worldwide at the 70th Festival de Cannes’ Court Metrage between the 22nd and 28th May, 2017.

The 15 minute film focuses on two dead neighbors having one last discussion as corpses in a local morgue. It’s at the end of their days that they make new discoveries on innate hate fueled by indoctrination.

Coat of Harm is one among Ohikhuare’s Conscience Films which includes Behind The Wheels, Verdict, Common Man, Retrospect, The Deadwood, etc. Behind the Wheels (2015) had the media abuzz last year with a stunt-gone-wrong episode involving an actor on fire. It was later discovered to be a stunt well-done with Ani Iyoho (Bad Drop) coming off unscathed.

Also in 2015 he was at the Festival de Cannes with Iterum, another 15 minute short film starring Kiki Omeili and Paul Utomi, and according to him:

“Last year, we represented Nigeria with the movie “ITERUM”. This year, we have sent forth “COAT OF HARM”. It’s an ART FILM with a message that is deep!”

The Festival de Cannes seeks to draw attention to and raise the profile of films with the aim of contributing towards the development of cinema, boosting the film industry worldwide and celebrating cinema at an international level.

The Cannes Court Metrage (or short film corner) is an attempt to offer an all-encompassing panorama of short film production worldwide, as well as to stimulate the creativity of short film artists.

Previous Post #FlashBackFriday: 7 of the Best Super stories by WAP TV to hit our screen

Next Post Movie Review: “The Road Not Taken” tell us that domestic violence is okay as long as the abuser is disadvantaged.