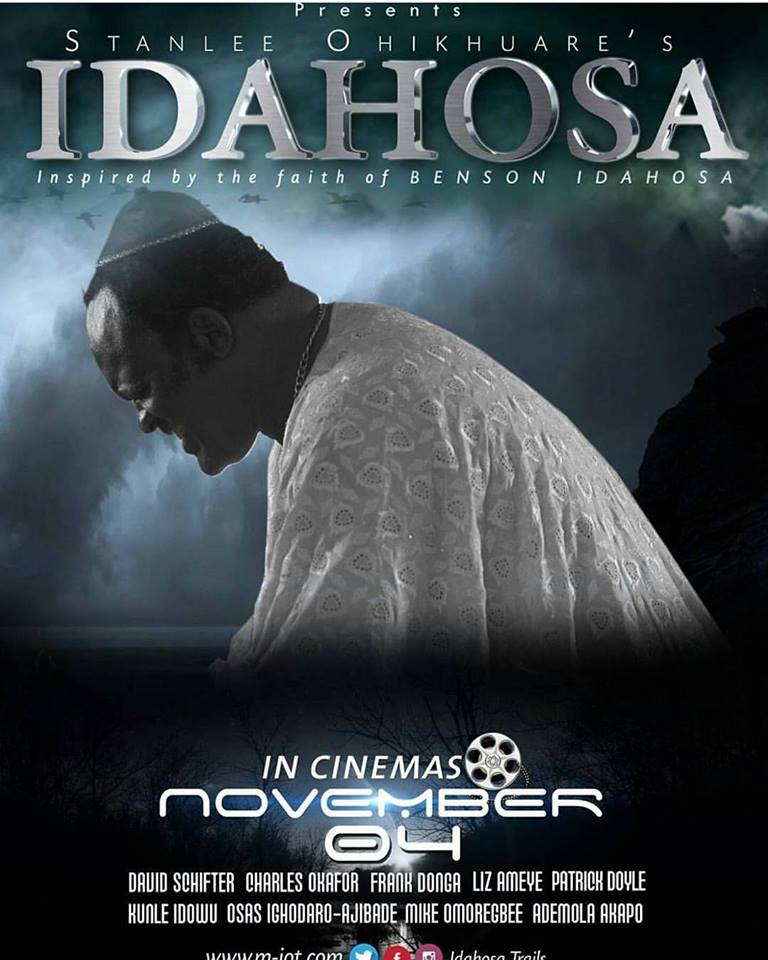 Idahosa Trails, a fictional narrative based on a true story, centers on an American journalist (David Schifter as ‘Thomas Book’) in search of an all-important interview. Ruined and bankrupt in America over a sleep walking problem, plus wanting to raise money for his father’s treatment, he visits Benin to cover an event in order to sell as a story.

Unfortunately, things didn’t go quite as planned and he ends up with no material for a publication. By a stroke of fate, he learns of a man who’d been raised out of a coma and bargains it for a worthy story. In his bid to gather as much data as possible, (despite the unending lack of internet connection), he learns of Archbishop Benson Idahosa, the divine vessel through which the miracle was wrought. His interest peaks and in no time he’s in need of an interview.

This leads him to Pastor Osas (Frank Donga), the film’s sacrificial lamb and my year’s best supporting actor. Frank Donga (Tatu) was a delight to watch, expertly aiding the Emmy award winning David Schifter (Check Point) blend superbly into a Nollywood production. Promising to lead the journalist to Idahosa, Pastor Osas led him through “the slums” for close to three days, looking for living testimonies till Thomas Book was driven to the edge.

The story, written by Stanlee Ohikhuare (Coat of Harm), cleverly puts the journalist out of internet for three days in a plot to prevent him from knowing Archbishop Idahosa was deceased. In such a scenario, Pastor Osas wouldn’t have been an option. Osas Ighodaro Ajibade (The Department) plays another Osas, a conscious Christian whom Thomas meets at a bar. Her impact in the film (i.e. the character) was as unnecessary as her presence in the script, not unless a Part Two proves a romantic inclination somewhere. For all that was obvious, she was unmarried and Thomas was divorced.

Idahosa Trails had too much dialogue and too many repetitions of scenes with Charles Okafor (as Benson Idahosa) praying fervently under a tree that brings American gods to mind. In one of the last scenes involving a road accident, the stunts bore too many resemblances to what we saw in Behind The Wheels – fast images and grabbing sound effects, but not one wide shot for a fair assessment. No proper view of the collision, nor how and when the body landed on the floor.

On a brighter note however, the actors were audible and the sound engineering was brilliant. I also loved how flashes of memories, previously surreal, were brought to light, one piece from the past after the other, like the fluttering white curtains and a hospital emergency. And marking his debut as an actor, Adedamola Akapo‘s relatable portrayal of the young Idahosa was a delight to watch. Described as a faith expression, Idahosa Trails is a well-rationed dose of humor and religion for a rapturous ending.

This film is rated 7/10 and is currently shows in cinemas nationwide!