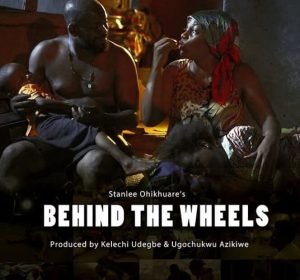 Auteur and multi-award winning filmmaker, Stanlee Ohikhuare, would be storming the cinemas with Behind the Wheels on the 9th of May, 2017.

Dubbed “Nollywood’s most controversial movie”, the film had it’s world premiere on the 30th September, 2016, at the maiden edition of the Real Time Film Festival. This took place at the African Shrine, Lagos, making it the first feature film to be screened at the esteemed cultural center.

The Real Time Film Festival is a celebration of artistic excellence bringing together cinema enthusiasts, filmmakers and artists from across the world to showcase the mastery of their craft and also experience an unforgettable collection of cross-cultural films.

Stanlee Ohikhuare is known for his Conscience Films which include Verdict, Common Man, Retrospect, and The Deadwood. His latest short film, Coat of Harm, would be premiering at the 70th Cannes Festival Court Metrage this May. Behind the Wheels is produced by Ugochukwu Azikiwe and Kelechi Udegbe (popularly known as Officer Titus).

Check out the movie trailer.

Next Post Movie Review: In Our Trap takes Inspiration from Domestic Violence