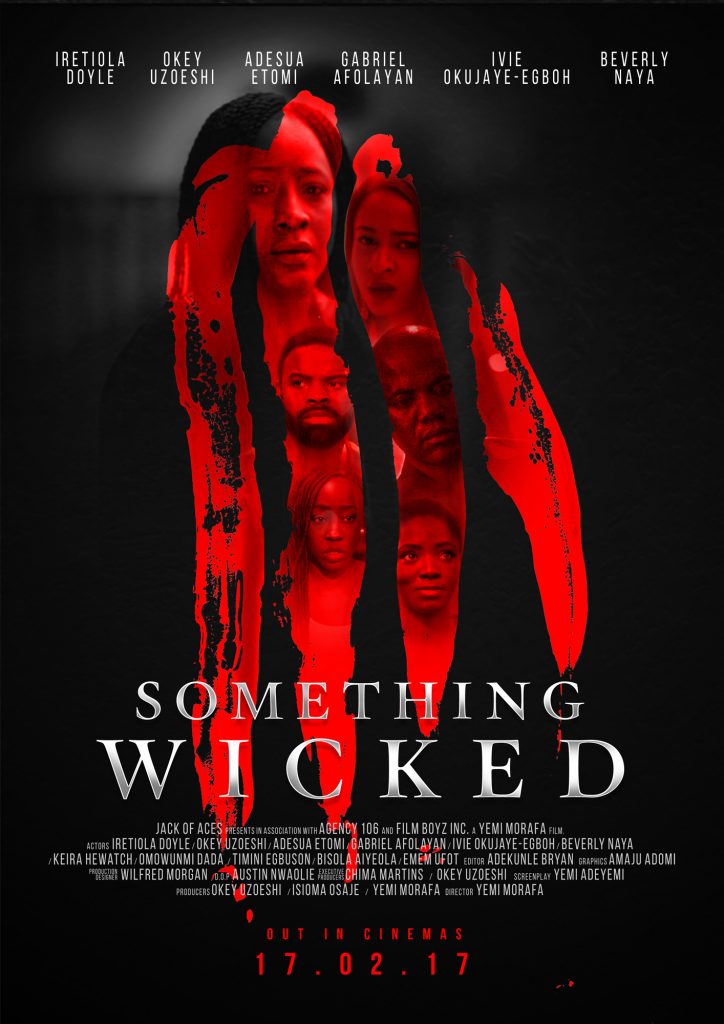 If you were one of those that trooped the cinema to watch “Entreat” last year, you will notice that the film was packed with so many celebrities to incite excitement and yet at the end of it all, what we remember is the celebrities featured in the film and what clothes they wore to excite us, not the story. ”Something Wicked” devises the same strategy of packing celebrities to deliver a message   but it does this with a purpose, the only problem is that this purpose is not established on time.

Hauwa (Iretiyola Doyle) runs a start-up with a friend, Claudia (Adesua Etomi). Hauwa is a widow with three children, Ali or Daniel (Gabriel Afolayan), Amira or Becca (Beverly Naya) and Jumai, Esther or Baby (Ivie Okujaye). Jumai or Baby is hearing-and-speech impaired. The reason Hauwa has named her children so diversely, is based on her changing faith and so striking a balance of some sort, her children have both Christian and Muslim names.

The first half of the film features Hauwa desperate, she is a widow with a family to provide for and all she wants is a loan to get her business moving, this is difficult but her younger business partner Claudia is ready to take one for the team. She wants to exchange her virginity in exchange for a thriving business.

Something Wicked packs on different celebrities and places them in strategic roles to engage us through the film and that is why we stay hooked through the first halve of the film. It rambles around the message for too long before we pick up the story and what the film is on about. The purpose of the film as a horror flick is only established with the arrival of Abel (Okey Uzoeshi), he appears at night and the scene where Hauwa opens the door for him alone tells us of a danger ahead. We understand that something is wrong with Abel. Under the rain, he is not afraid, he is not shivering, he is not eager to come into the house. How we expect a person in need to react is not how he reacts and so for the most part of the film, we witness a highly psychotic guest, which predictably becomes the downfall of the family.

The writer creates a story about Abel’s obsession but Abel hardly displays traits of an obsessed man, maybe once or twice, but this is not properly established. The basis of this obsession is not explained and the writer does not bother to build on this obsession and so, we, the viewers are left to hang and find the explanation to everything that happens.

The glory of the movie comes from the wonderful humorous performance by Clarissa (Bisola Aiyeola) and then the one-liners by Claudia (Adesua Etomi). Hauwa and Clarissa do not get along. Clarissa is the over dramatic, neighbor, when she is not drunk, she is parking her car in front of Hauwa’s driveway, or stalking the family.

This is Okey Uzoeshi’s best performance. As Abel he brings the horror, his facial expression and gestures are highly magnifying of the danger that he is, sometimes we root for him because he has lost his family but other times, it is clear that he should be gotten rid of. His reason for causing harm to this family is partly because of his obsession with Amira or Becca (Beverly Naya). Becca has her own issues with her boyfriend and on several occasions, Abel watches them. His target is the man in love with Amira or Becca. Another striking performance comes from the vocally impaired Baby (Ivie Okujaiye) she gives a performance that makes “Something Wicked” recommendable. She says a word in the whole film but her facial expression does it.

Visually there was applaudable work done to create a horror experience at the theatre. The make-up artiste, especially, does a commendable work, specifically in the scene where Baby is attacked. A lot of effort was also dedicated by the editing team; when Abel first arrives to the house, the scene alone is one that is intriguing, the thunder striking, the gaze and that moment is work that was done with dedication.