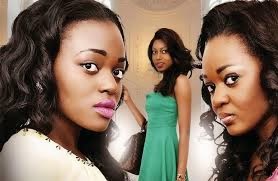 Sometimes self impose foolishness is a virtue needed to defeat an enemy, which you are… Ayah
While I might have written off on Ghanaian productions in my post sometimes, there was this something about ‘Sister’s At War’ that got me intrigued. Michelle and Ayah are sister and heirs apparent to their father’s large estate. However, their rivalry intensifies dramatically when their father unexpectedly dies and leaves the entire family fortune in the hands of his older daughter.
Jackie plays the role of the elder sister Michelle, who at every point in the movie told Ayah, she was 10, 100, in fact a thousand steps ahead of her in the game pulled her weight. It wasn’t an awesome performance, cause at some point, I was struggling hard to believe she was actually ahead of Ayah, so she was just okay.
Welcoming to the scene, Okawah Shaznay who played Ayah. I had seen her first in ‘Cheaters’ and I must say she brought some difference in that obnoxious movie. She brought her carriage to this movie, delivered to punchy and powerful lines as her eyes spat venom. Those same eyes made her look sometimes sexy and sometimes brattish. However, as she had the powerful lines, she also had the worst diction, pronunciation and use of grammar in the movie. While we can blame the Ghanaian accent for this, (or can we)  I couldn’t help but shake my head at herself and Jackie for this.
Yvonne, as double agent, two faced back stabbing b*tch, felt different from what I was used too. She carried her role well and actually got off which isn’t a norm in our movies on this side. But her make-up in fact the make-up on all three ladies felt extremely too much to be real. I was kind of confused if it was a movie or it’s premiere as the make-up artist didn’t do justice to their looks.
For the men, same ol’ same ol, Eddy Watson, Frank Artus,  Abeku Sego didn’t seem to pull their weight much compared to the ladies who brought all the drama and action to the production.
As it relates to directing, nothing major stood out, I feel it was the script that did it for me, but scripting in some areas. For production and post production, I can mention a couple of things that begs reason, Jackie been shot on one leg and feels norm in both and then her limping wasn’t handled properly or real. At every point in this movie, there was a slap and I don’t mean a mild tap, a hot slap, made me wonder why the movie wasn’t just named ‘The Slap’. I would like to add at this point that  the character Musa played by Jaleele Muhamed was totally unnecessary and should have been scrapped for the movie. If there is a feeling that comic relief should be inculcated into the movie, why not task the script writer to come up with witty and funny lines that will illicit comedy as against throwing him as a character and getting an obnoxious performance.
Sisters At War, wasn’t particularly intelligent or spark up any memorable lines, except maybe the one picked up initially, which made me interested. From Xplore, it gets 4/10.
You can watch Sisters At War on www.irokotv.com.
Have you seen this movie, tell me what you think about it below.
No votes yet.
Please wait...
Voting is currently disabled, data maintenance in progress.