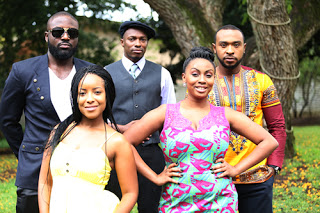 Inspired by actual events, Silverain is a political melodrama that tells the story of Adjoa (played by Joselyn Dumas) who braces against all odds to make ends meet as a market porter. Coming into the cinema after the movie has gone a couple of minutes wasn’t my intention, but I had seen this poster and I wanted to see what the movie was about.
I walked in to see a blacked faced Dumas struggling to irk out a living and my first thought was can depicting a poor person get any better than this please? The movie seemed to go on about the life of a market porter as I settled in to watch, things began to get clearer to me.
While focus was on the life of the market porters, the other critical issues like the political campaigning, social inequality and getting the poor to vote, as the powers that be look for ways to get them off the streets, brought that animal farm nostalgia to the fore for me. The movie couldn’t have been any clearer on how day in day out, the needs of the people are always put aside for the benefit of political circles, but then, the focus wasn’t solely on this.
As mentioned, Joselyn plays one of the market porters who is almost run over by Enyina’s character, a business man who is also the son of the speaker of parliament. Joselyn seems to be ticking the right boxes as this role sort of shows how versatile she can be in the industry. The slums of Ghana were on full display and she took hold of the character with the Ghanaian accent sounding more clearly than ever. Not sure how it clearly disappears as she transitions from that market porter role to one who is well kept, but hey, I love her demeanor and I foresee her nomination in the Best Actress category at AMVCA’s for next year.
Welcome Enyinna Nwigwe to lead roles.  Enyinna isn’t a new kid on the block as he has been in the industry for a bit and as a comeback he’s been seen in a couple of movies including “When Love Happens, Thy Will be Done’ etc. Most of the cheekiest lines came from Enyinna and even though he is no Chandler from “Friends” he managed to get me giggling once in a while. He had a good presence, carriage, speech and was well composed, he was a player that didn’t seem to try so hard but delivered to his lines with the charisma and looks to go with it.
Chumani Liberty Pan who plays Mark was such a sweetie and the Jiminy Cricket  of this movie. I was in love with his character and how he portrayed himself. It felt like he’s boss played by Enyinna saw him as an equal but in actual fact he was the help and that in itself was also different. Never arrogant or boastful, he’s character never put up a front that he could be at par with his boss and in no way did he for once show that he was in competition. That all out submission is something I haven’t seen in our Nigerian production.
Elikem Kumordzie and Uru Eke also brought their skills to bed in this production. I felt Elikem’s character was overdone, as chief of staff, he was pretty hard, barking orders and looking really dark, reminded me of Abacha but he probably could have toned it down a notch. As for Uru, she did great. I love the scene with her and Bruce’s mum and her docile look when she responded to her questions, but when it came to time to fight for her man, she suddenly became smart and wise in the antics of women. I do hope that she isn’t been type-cast though as I see a trend in her roles.
The movie was plagued with the usual production gremlins; I cringed in my seat. Camera angles felt oddly out of place, some close shots were too close, dark scenes especially at night, while sound quality wasn’t too shabby. Silver Rain the directorial and writing debut of Juliet Asante brought a perspective  rarely explored by women in the movie industry. The movie was a combination of political power, menace of inequality, promiscuity and eventually love. She is a contender for director of the year, at the AMVCAs, so I will be rooting for her.
Silver Rain is a brilliant production with a Pan African cast that did justice to their roles. It will make my top movies of 2015 (when I do have a count-down) and earns a 5.5/10 from Xplore.
No votes yet.
Please wait...
Voting is currently disabled, data maintenance in progress.