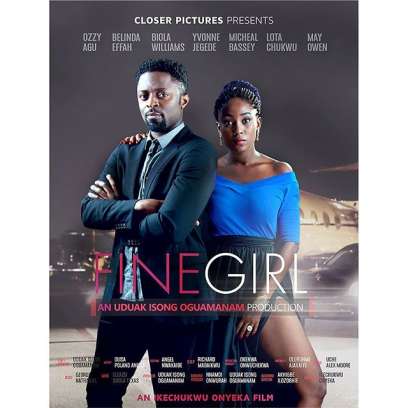 Poverty is the one thing that everybody prays to escape. It is the test of dignity and in Fine Girl, we see how far a girl’s dignity is tested due to her poor background.

Chika (Lota Chukwu) has a sick father in the hospital; she is trying to save money for his treatment. Her N20, 000 salary as a waitress is nothing compared to the N300, 000 needed for her father’s treatment. She has to make a deposit of N100, 000 before the doctors treat her father. You know how our hospitals are- you have to bring the money before the treatment. The doctor does not want excuses, and the pressure is on Chika.

Her close friend Vera (Belinda Effah) opens up to Chika about how she manages to survive by getting involved with men in a form of prostitution that has been polished and termed- Escorts. The pressure to get the money mounts and when Chika eventually decides to be an escort, she loses her virginity to her first client, on that same night she loses her father. But Chika is angry at herself and instead of forging ahead, she continues as an escort because she already feels dirty. Things change when she meets a young, influential and kind man called William (Ozzy Agu).

Fine Girl is a fine film that is in need of a creative title. The title presents the film as one of those generic productions made for the purpose of quick profit but it is not.

The story is commendable for tackling the issue of poverty, guilt and the few options women have in life. Chika’s father cannot be treated because they lack the money but most importantly, Vera also has a story. She is an escort so that she can pay her fees and take care of her family. Desperation leads both girls into prostitution but guilt is why Chika cannot stop being a prostitute. She already feels dirty and it is the question of, how can I step back and be the person I used to be? Clearly, that person is gone and for her it was necessary to keep up with the new person she is. She does not do it for the money but the guilt of letting the well brought up Chika go.

Fine Girl does not just have a fine story but a fine, young and generally talented cast. The lead character Lota Chukwu earned our empathy by performing her role as Chika so naturally and Ozzy Agu steals our heart as the charming William. The crown goes to Micheal Bassey, who plays the pimp. He was the best thing to happen to the film. He plays the weird, smooth talking and opportunistic pimp, and he carried the character with a humour that compares to none. Belinda Effah and Yvonne Jegede also do a fantastic job in their role as Chika’s friends with contrasting morals.

This is from the director of Mr and Mrs, Ikechukwu Onyeka. The film is also backed up by Uduak Isong, Rita Onwurah and Bunmi Aj and it is a fantastic film, which I insist needed a more creative name.

Xplore rates Fine Girl with an 8/10

Next Post 6 Films that focus on Important Facts in our History and why you should check them out!