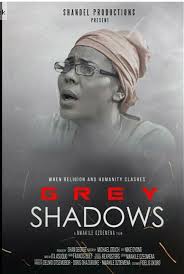 The challenges with medical services in Nigeria is of great concern. There are a number of sad stories of how the neglect from medical practitioners and the lack of good facilities have led to the lost of lives.

Shan George, who has given many years to the film industry has taken her experience to make a film out of it. Shan George says  her mother’s illness inspired her new movie, ‘Grey Shadows.’

According to Shan, the movie which was recently premiered focused on how sick people are treated in the country.

Read further in an interview with The Nation

“Actually, to put it in a very simple sense, it’s about the negligence of medical practitioners towards sick people generally,”

“People that are working now in the medical sector really don’t seem to bother much about sick people because I’m imagining if you were passionate about an ill person and they bring a sick person to you, you won’t first be asking for money physically.”

The actress also revealed that her mum’s illness motivated her to produce the movie which she said is expected to be public by April.

“My mum was sick for six years. So, since 2011 till towards the end of 2017, my mum had been bedridden. I saw a lot while I was in the hospital trying to take care of my mum.

And I had to also move to Calabar based on the fact that my mum was moved to Calabar by her doctor in Abuja.

They moved us to Calabar so, they we practically moved there. I mean, being that we’re also from Cross River State, it was a bit easier.

I got a lot of experiences from there. Also, other peoples’ own. And put them into make a movie.  You know how e bi na.”

Next Post Xplore Reviews: In “June”, Michelle Dede confirms her expertise in Acting!