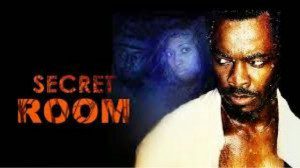 Director – Eneaji Chris Eneng
Written by– Jide Okeke
Cast– OC Ukeje, Jide Kosoko, Lilian Esoro and Linda Ejiofor
Genre– Thriller
Run time-1:44:22
Year – 2014
You see, I have waited for this day a long time, since I knew what treasures abound in this house, I have waited and carefully planned… Ojei
“Secret Room” starts sending chills down my spine from just looking at the poster. Not sure where the excitement steamed from, but i was looking forward to watching this thriller that had a 3 man cast. Edna, is the daughter of a wealth ambassador who dies some time in 2007. There she meets Ojei and gets married to him. During the reading of the will, Edna discovers her father has a home that he never mentioned and decides to go and find out more about the mystery house.
In its own way Secret room is our version of those haunted house movies that we watch at night and are terrified to sleep later. The location of the movie which was a small quiet village somewhere in the western parts was totally apt, the fact they had the weather( man made or otherwise) on their side made the production believable and different.
As it relates to the cast, the characters seem to fit perfectly to the roles assigned.  OC who played Ojei delivered to his role, scheming, plotting and waiting on the right time to take his revenge. I loved the way they were able to carry the suspense without making the story feel boring, Linda also handled her bad arse role well. For Lilian, haven’t seen her in any movie before so I was extremely grateful for more suspense and short lines for her character.
Weather props were okay, especially the rainfall it felt real and truly believable. The director delivered to high picture quality at the beginning and during the day but by the time they reach the suspense scenes,it was a strain to see what was going on and since the effect for the thriller stemmed from the darkness, the shots were too dark to make out what was going on.The fight scene was one of those scenes where more light was needed as well as a choreographer as the fight and eventual kill was pretty weak.
There was an impressive feeling of the time taken to prepare the various documents found in the house, documents typed with a typewriter signifying the times, the journal of the former owner of the house showed that a little bit of research must have been carried out. It wasn’t pleasing however to see the model of iPhone and blackberry used by Edna and Ojei for a movie that was supposedly shot in 2007, continuity anyone???
Secret Room definitely had its hits and misses but surely they could be forgotten, my final hit and miss before giving a verdict, using the gas cylinder to get rid of Ojei was a classic, but blowing the cellar of a house without smoke or an explosion just shows that it takes only 1 thing to spoil a good production.
The movie gets a 6.5/10 from xplore.
For more reviews and trends, follow me on twitter @xplorenollywood
No votes yet.
Please wait...
Voting is currently disabled, data maintenance in progress.