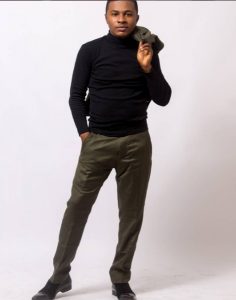 How do you reap more from a famous character that most Nigerian families have come to adore? Go independent, and create more laughter! That is the answer Samuel Ajibola gives us with his new exciting web series “Dele Issues”.

If you are a fan of Africa Magic, then you must have caught at least an episode of The Johnsons. There is no Johnsons without Spiff. The famous Spiff character is a poster image of a clown. He won an AMVCA in early March for playing the comedic character. While accepting the award, Samuel went on to imitate Spiff. The roar of laughter from the audience proves the love for the character Spiff. Spiff’s tongue is always out; his hands are always curved in a slightly uncomfortable gesture. Those are the mannerisms that make his character enjoyable, another reason we enjoy Spiff is because Samuel is an exceptional actor. The believability of his performance makes it difficult to imagine he can offer an intelligent speech. You need to watch his interviews! The guy is smart and Spiff is only a character.

It is his smartness that has inspired a web series titled “Dele Issues”. Samuel is Dele and he insists on banking on the fame playing Spiff has earned him. As Dele, he takes a similar mannerism to Spiff, but Dele is more matured.

In the first episode titled, ‘No Retreat, No Surrender’, he offers something that should make viewers return for another episode. ‘No Retreat, No Surrender’ follows Dele as he deliberates how to get his money back from a friend who had borrowed over N200, 000 from him. Naïve and unable to make a request, Dele pulls off his clothes and jumps into a pool of water, he calls on spiritual bodies that exist in the water to help him get back his money. It becomes a contest, his friend gets naked too, and begins his own incantations, the next thing that happens shock both of them.

Dele Issues is structured as a skit. It can be passed on social media and then we get onto the next joke, but Samuel is smart. He is on Africa Magic as Spiff every evening and he realizes the strength of the character he plays, and so he structures a show that feels like a skit but offers more. Every episode can stand on its own. Every episode has a different situation. Dele encounters different people, and each time his stupidity, and this time, hostility comes out to play.

It is a series that offers many new actors an opportunity to shine. Because he is the lead does not mean he hires just anybody to act. Samuel understands the power of team work and so he employs good actors for every scene. We meet impressive actors, scene after scene and that is worthy of note.

Dele Issues is a great series, three episodes in and we are keeping tabs on this one. Samuel understands how to make ‘bizness’ out of the showbiz and he is smartly doing this.

Next Post Bisola Aiyeola has a Bright Future in Nollwood. Four times she slayed on screen.