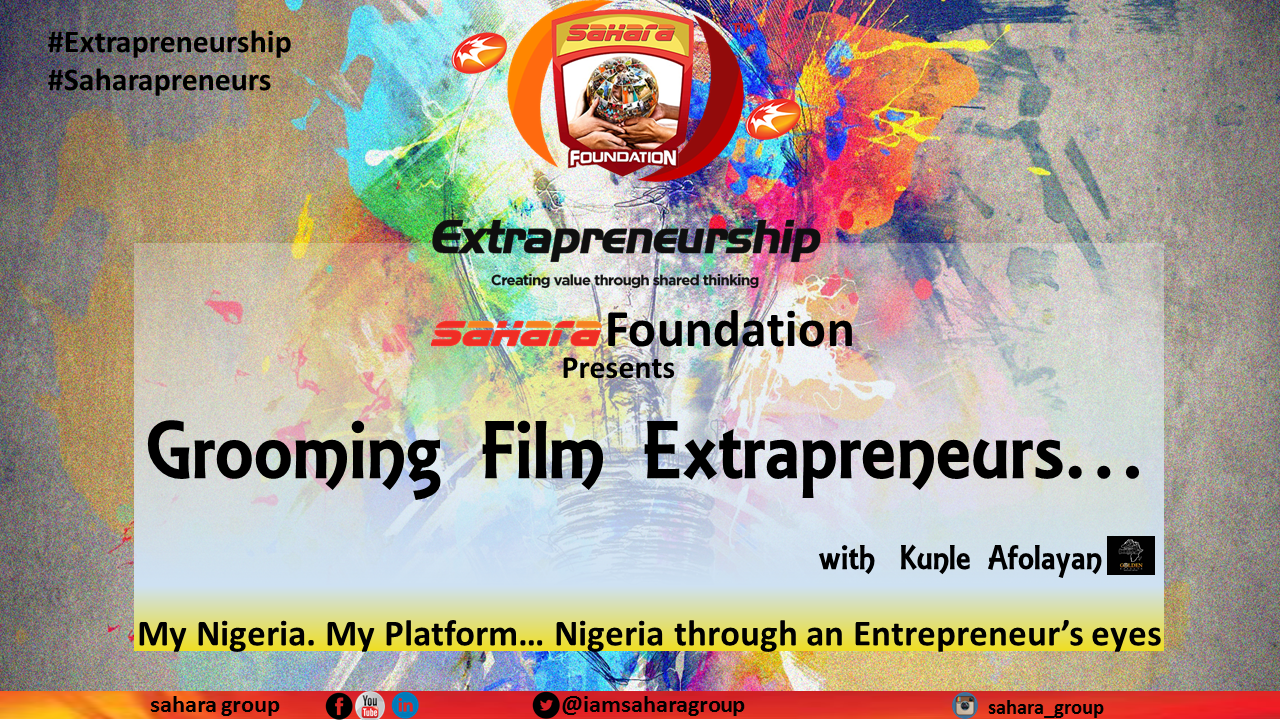 Sahara Foundation has flagged off its extrapreneurship initiative with a competition designed to provide a hub for budding film makers to express their skills under the tutelage of ace Nigerian film producer and director, Kunle Afolayan.

This competition is the first in a series of activities to mark the 20th anniversary of Sahara Group, a leading African energy conglomerate with operations across four continents.

Tagged “Grooming Film Extrapreneurs with Kunle Afolayan,” the platform seeks to connect young film makers with stakeholders that can help hone their skills to enhance productivity, excellence and sustainability in their careers. The initiative is the maiden project under the Extrapreneurship Framework which is being driven by Sahara Foundation, the corporate responsibility vehicle of Sahara Group.

The competition which runs from July 1st 2016 to July 25th 2016 will require young film makers in Nigeria to channel their creativity into celebrating entrepreneurship in Nigeria by shooting a 15-minute documentary that captures entrepreneurs at work across the nation.

The theme of the documentary is: ‘My Nigeria, My Platform…Nigeria through an entrepreneur’s eyes.’ Whilst the documentaries will help shape a positive narrative about Nigeria – one that captures our enterprise and productivity as a people – Sahara Foundation hopes that they would create a hub of shared creativity and thinking in the film industry that will promote and sustain growth.

Speaking at the event, Managing Director, Sahara Group, Anthony Youdeowei, said the company believes the initiative would help birth success stories that will transform the economic landscape of Nigeria and Africa through the Arts. “This project is an opportunity for Sahara to contribute to socio-economic growth in Nigeria where we have had the opportunity of growing the Sahara Brand for 20 years. At Sahara, we are passionate about Nigeria and believe that the initiative will help shape a narrative of Nigeria that captures our enterprise and productivity as a people,” Youdeowei said.

Also speaking on the project, Kunle Afolayan said he was delighted to collaborate with Sahara on the initiative, adding “it has been my lifelong dream to play a role in moulding aspiring film makers and this project with Sahara is the ideal platform that might just produce the next big thing in Nigeria’s movie sector.”

The 15-minute documentaries are expected to highlight the story of Nigerian entrepreneurs, with a focus on how their activities are providing sustainable solutions, creating employment and promoting socio-economic development in the nation.

The documentaries will be screened by the multiple award-winning Kunle Afolayan and the overall winner will undergo a mentorship programme with the leading film producer and director for six (6) months.

Describing the format of the competition, Afolayan indicated that “we will be expecting entries from young film makers across Nigeria, which will be whittled down to a shortlist of 20, a number that is commemorative of Sahara’s 20th anniversary. These 20 entries will then go on to the final stage from where a winner will be selected”. He also added that filmmakers interested in the project must not be more than 35years old.

“At the end of the training period, I expect that the overall winner would have improved on overall film making capability, style of storytelling, subject matter interpretation, audio and visual quality, aesthetics as well as understanding of the perspective of a story. More important, the winner will also learn the commercial side of film making so that he or she is not just a good film maker, but also be a wealthy film maker.”

Kunle Afolayan gained international reputation after Irapada, his 2006 Nigerian supernatural thriller film, won the Africa Movie Academy Award for Best Film in an African Language. He has produced other award winning movies such as October 1, The Figurine, Phone Swap and The CEO.

For more details on the project, please click here http://www.sahara-group.com/docs/extrapreneurship2016_rules.pdf