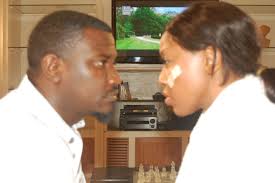 Is this what you meant by in sickness and in health- Rosemary
Mina Productions presents this Desmond Elliot movie ‘Rosemary’s Fight’. The movie revolves around Rose played by Rita Dominic the wife of John Dumelo’s character who is physically and emotionally abused by him.

The movie kicks off with a narrative that wasn’t too shabby, but haven’t seen that recently so I guess it ticks the box of being creative. The chemistry between the couple seemed to work and I came off with a new level of respect for both Dominic and Dumelo.

Rita, the upcoming copy writer, dropping her career to become a stay at home wife and mom, was good to watch. She carried her role properly for a 27year old. Her lines were clean and clear as she was one with her character.  Like women who have been abused, she tried her best to stand her ground and drive her points and thoughts. Make-up and costume was a mighty plus for her and did her justice, the red eyes, the coughing brought to light the plight which is violence against women.
John, oh John; was true to form, authoritative and straight to the point. At no point did he look back or flinch when he was punching the love of his life & mother of his kids. He’s showing up at random was epic and showed his obsessive character. How he moved from slap to a showed a some level of growth from him.
All other supporting characters did just that, support. Couldn’t stand the friends in the restaurant scene, counting words, the accent was horrible and showed why Rita is the best at what she does, as she was down to earth and real. Uti was just there, wasn’t really feeling his compassion or the empathy at what was happening to Rita and their chemistry was nonexistent. Why Desmond feels the need to be in a role of most of the movies he directs is beyond me, but he felt like a yo-yo as he moved from English, Yoruba and Igbo accent it was appalling and lacked professionalism even for the profession he was representing.
Script was a knockout and really welcome. ‘Once is Enough’ would have been a good title (Xplore taking a shot at movie naming) as it only takes one slap to know that your husband or boyfriend needs help. The fight against domestic violence for both men and women is real and there is need to use the arts to correct the wrongs out there. Yes, it had its cheesy lines, but it also  showed the various stages of hurt women go through in a violent home. It would have been pretty nice if there was a scene where she reached out to a support group instead of her wacky friends, but I guess since we don’t have that many out there, the lawyer angle worked. Not sure how catching her husband beating her on tape was her only satisfaction as well as getting half of his wealth. It would have been epic if it was a total take down and ruin.

Production was also done well, the movie was right on point with time. Scenes were straight to the point and no beating about the bush. Costumes were on point, make-up after the beating looked real and showed properly on Rita’s face however the make up couldn’t hide the sweat that was ever so glaring on most of the acts.

Desmond is soaring as as a director and he did great work here. The beating angles are a necessity for production such this and it shone through here however, there is need to work on special effects to make beating and punches more believable, even from the recording we could see and hear it was fake. The angle of the first strangling scene was one we needed to see Rita’s reaction to appreciate but we were denied that. All in all not a totally bad one and did Desmond make Rita in heels, that was funny.

Rosemary’s Fight is a storyline we can never have enough off, and earns a 5.5/10 from Xplore.
No votes yet.
Please wait...
Voting is currently disabled, data maintenance in progress.