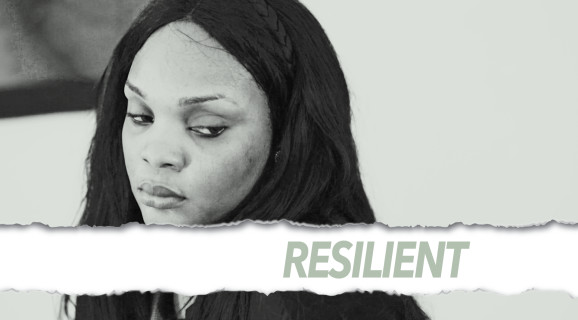 A married couple film from Heat Factory ICI, Resilient journeys into the lives of Andy (Anthony Monjaro) and Asha (Monique Samuel), two loving newlyweds. Asha is richer than Andy. Andy makes only enough for himself and his wife. Unfortunately and all of a sudden, he loses his job. He later gets fed up of job hunting and takes to playing video games after she leaves for work. She doesn’t find it funny. He loses his mind in a barrage of her nagging and ends up beating her into a coma. That’s where the film really starts.

It’s not completely thorns and snakes, this film has its very hilarious scenes, especially with Bukky Wright (playing Asha’s mother). Anthony Monjaro (Last Flight to Abuja) doesn’t falter in his role as a loving, confused and crazed husband. With the grey singlet he wore after losing his job I think he played Andy to perfection. His beard should have grown a little for being broke.

In a scene with Asha on the phone with her mom, there was a guttural voice, probably in the same room, giving her very audible feedback. Her costumes, like on most members of the cast, were very good. Especially her wedding gown and Bukky Wright’s Yoruba headgear. I find it odd that barely a few months into the marriage, Bukky Wright (Iyore, Saworoide) was itching to spoil the marriage. Did she not collect a dowry at the wedding recently? Her antagonism was both excessive and uncalled for.

Monique Samuel (Wife Beater) was a complete ball of energy. Her nagging was close to violent. When she was pent up, she was pent up! She turned off her husband’s alarm to get him late to work. With what she put him through, I feel he should’ve supported her dreams of starting a business. That would have kept her busy. The lighting (Kelvin Sunday) where Andy and his younger brother ate supper was dark for no apparent reason. There was no reason to set it in the dark like it was at night or there was ‘no light’.

The aerial views (Eme Emmanuel Frank) were lovely and makeup on Asha was flawless. Emotional scenes were touching (that was before the fighting started) and locations couldn’t have been better. A Onesoul effect. The serenading classical music in the background bore a reminder to Hearts (2016).

For me Resilient nailed it on every front (except for the guttural phone calls and tacky sound engineering). Produced and directed by Onesoul, Resilient was inventive and educating.