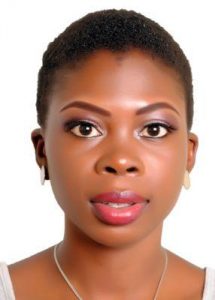 The new season of Desperate House Girls is quite the experience. It whips up different stories, introduces more characters and we also enjoy the growth of some of the old characters. Koyinsola AKA Koins or Constance (Peace Oni) ends up the star of the new series. She returns to Lagos and has the opportunity to continue working for the Elliots, they also enroll her in an evening school where we experience Koyinsola with her peers.

So who is the star behind the very comedic character? Peace Oni. She became an instant sensation from the first roll out of Desperate House Girls after she broke into a sensational Yoruba dance (she does it again in the third season). She adapted a heavy Yoruba accent, and is featured with tribal marks, which distinguishes her from every other house girl in the series. Peace is going to feature in “Lost in London” by Uduak Isong and the media is paying attention to the impressive talent.

Here are 5 things you should know about the upcoming act!

5. She is a graduate of Economics and also a graduate of the Royal Arts Academy:  She studied Screenwriting at the Royal Arts Academy. Peace Oni’s reason for applying to study screenwriting was out of fear that her father, who is a pastor, will not let her become an actress, and so instead of apply for an acting degree, she went for screenwriting. She credits Sukanmi Adebayo, Anthony Kehinde Joseph, Yinka Ogun and Uduak Oguamanam as mentors.

4. Peace Oni is a screenwriter: She did not let her certificate go to waste. She contributes to Desperate Housewives as a writer and has written five short films.

3. Peace will feature in Uduak Isong’s “Lost in London”: A video of her trying to process her visa is already cracking ribsandw e cannot wait to see her in the film . “Lost in London” is perhaps her most buzzed film till date. She has numerous collaborations with her mentor Uduak Isong. They have worked together as scriptwriters for Desperate House Girls. She has also acted in short films by Uduak. She will also feature in Lost in London, out in cinemas in June.

2. She has an inspiring blog:  https://olivepeters.wordpress.com/ she writes about being a pastor’s daughter and it is also an outlet of emotions, and experiences. The blog is a great read.

1. She can’t be confuse with the characters she plays: Peace is eloquent. Most of her productions have featured her with a Yoruba Accent, and tribal marks but Peace does not own any of those.

We believe that with more productions coming up, it is a matter of time before Peace Oni becomes a house hold name.

Have you heard about Peace Oni? Tell us what you think  about her.

Previous Post ‘Stranger in My Bed’ is a film you should watch on a good day.