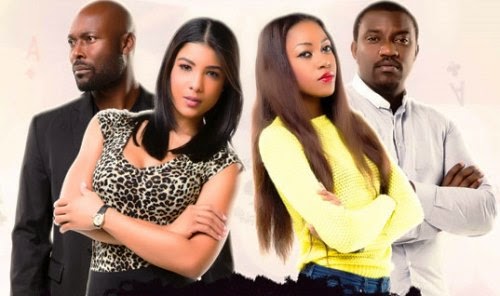 Director– John Uche
Script– BJ Winfred
Cast– Jimmy Jean Lewis, John Dumelo, Yvonne Nelson, Van Viker, Saroji Bertin
Time– 2 hours
Year– 2014
One thing you would have noticed, is the fact that, Xplore is selective when it comes to watching movies. I have stuck to watching movies in the comfort of my home than head to the cinema to watch a Nollywood movie I know next to nothing about. I fall under the category of people that even after watching a Nigerian trailer, I will wait till it eventually comes out on DVD.
Based on the insistence of my editors, I decided to watch a local movie at the cinema and ol’ boy, was  it something. What movie you ask? “One Night in Vegas” a movie from the stable of KM Productions and RVI Media, stars Yvonne Nelson, John Dumelo, Jimmy Jean Lewis and Van Vicker. James and Genie, played by Nelson and Dumelo are an estranged couple who attempt to better their relationship by taking a trip to Las Vegas to rekindle their lost sparkle.
On walking into the cinema hall like 5 minutes after the movie started, with 4 couples in it, I was immediately hit by its low production quality. For me, it begs the question on what kind of cameras our local movies use for shooting as well as our inability to produce films that will be world standards. So here I was watching the movie and thinking out loud on the plot, who actually goes to Vegas for a couple’s retreat, but Vegas they went or did they really? True they where in the States as the footage didn’t look like Ghana or Nigeria at all, but actually in Vegas, I doubt it pretty much.
As it relates to the characters, I heaved a big sigh. As an estranged wife, Yvonne was okay pulling it off, as tired  as she was, and wanting to give up, she still kept on and stayed with her husband amidst her own infidelity. For John Dumelo, he was pretty safe. He brought nothing or took anything out of his character, It felt like he was called in as a filler as his character was pretty forgettable. For Jimmy, Lord knows I seriously doubt his abilities to act. He comes off as a filler just like John, he’s lines were incomprehensible and seemingly forgettable, as a lover he doesn’t come across as wanting to keep or be with his lady love but eventually let’s her walk out of his life. Van Vicker seemed to be the only character one could relate too. A player made so by covering the infidelity of his wife and isn’t afraid to say how he hurts.  Not rocket science, but he seemed alive and at home with his character.
Scripting was the usual, exceptionally long scenes that left one more confused. Horrible grammar as well as the inconsistency in details from characters. There was no notable or outstanding conversations hence the lack of my title sentence that usual starts my reviews.  Read on it Wikipedia page, that the film has been known in the Nollywood/USA market as the film poised to raise the bar of African films by utilizing a more western approach to production quality and standards and I heaved that long sigh again!
John Uche as director, didn’t showcase any outstanding angles that made one feel like there was an introduction or infusion of American standards in this production. Heck it was worse that ‘Doctor Bello’. My final sigh which i had mentioned at the beginning, was the use of footage of Vegas cause i seriously doubt their presence in in the town. What was shown was footage that could have been culled from movies like the Hangover or any other movie shot in Vegas but hey I stand to be corrected.
One Night in Vegas was a good waste of my popcorn and drink. From Xplore it earns a 2.5/10.
Have you seen One Night in Vegas? Let me know what you think.
No votes yet.
Please wait...
Voting is currently disabled, data maintenance in progress.