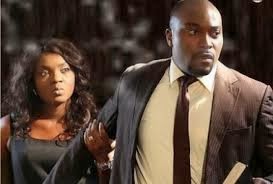 A man showered me with attention and I responded… Kemi Williams

Seeing Chioma Akpotha, besides the Harpic adverts was what motivated me to pick up a copy of ‘On Bended Knees.’ First off, I got a copy of the movie, that wasn’t well produced/recorded as the sound of their voices and movement of their lips were not in sync and this made watching the movie a complete horror.

Kemi Williams, had been married to Pastor Reuben Williams for 15years until he got his calling to move back home and Shepard his folk. Kemi had been her husband’s backbone, however, she was getting tired of all their activities centered around the church. She decides to get a job in an advertising company and whilst there, begins to develop feelings for her boss.

Like I mentioned, not sure if it was from the copy of the DVD, the acting, characters, directing or the script, but I wasn’t blown away at the end. Chioma does a good job ranting, being angry and trying her very best to get her husband to put more effort in making their marriage work but everything else seems like a drag.

When it comes to chemistry, Chioma and Ebube played by Chet Anekwe are not convincing at all in fact there is no chemistry between them. Chioma appears stiff and uncomfortable when it comes to the romantic scenes and that was downright obvious.

Seun Akindele has been on my watch list for a bit, but his role as Head Pastor seemed like an overkill. My first thought initially went to ‘Out of Bound,’ that thought soon cleared from my mind. As Pastor Reuben wanted to be everything to his flock to the detriment of his marriage and even if he wasn’t even married, it is an act that is not sustainable. This behavior was what got his other colleagues envious of his status.

Chet Anekwe was erm… I’m lost for words. As an advertising person myself, he was too rigid for the role. One doesn’t need to sit down and speak to individuals who run agencies to know that they aren’t always and I mean always in a suit and tie!!! Hian. He’s language and demure wasn’t convincing.  Between himself and Chioma, they manage to convince us that all they understood about advertising was shooting a ‘testimonial’ advert, even that was an extremely weak example.

As usual, there were the unnecessary scenes, although one can argue that it gave one a clear understanding of what to expect, I say do away with them and make the movie short and concise.  Scenes like Chioma bonding with her boss’s daughter, Gloria and Pastor Thomas’s scenes and so on. There was also the hilarious scenes, like Ebube’s ex-wife scene, it was total chaos and any sane woman would have know she shouldn’t be working for that kind of boss, anyway.

The laptop not being plugged, Chioma typing on a laptop that wasn’t on, was the movie gaffe for me, Gloria’s emphasis on her words, dragging them like she was having difficulty hearing what she was saying and watching Lancelot the director acting as against giving us some memorable shots was my WTH moment while Pastor Agu, played by Francis Onwuchei was the champion of this movie. He intentions were extremely clear and even when Gloria mentioned the plot, he’s look showed that he didn’t want to be an errand boy any longer.