Omoni is on every blog, she is all over social media, her new film is coming soon and the woman does not joke with marketing. It is good marketing that helped “Wives on Strike” land on the highest grossing Nigerian films list last year. It was one of the best films released in the cinema and it earned good money.

For “Okafor’s Law” we are eager about it for several reasons. Omoni has proven time and time again that she is all about growth and representing the diverse capabilities of women in the industry and we cannot wait to see what “Okafor’s Law” has for us. 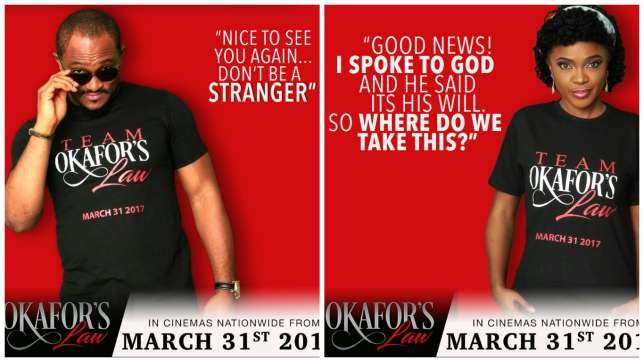 We have argued about the laziness in making captivating film trailers in Nollywood. Even if the film will be terrible, just give us a film trailer that tells us a story. Omoni does and from the trailer, we can tell that we will be dealing with a philandering egoistic male lead and his three female conquests. A central part in the film trailer is when a short story is told of how the theory came to be, I am more excited about that.

2. Omoni’s Growth as a director: There was, “Being Mrs Elliot” which was an attempt that worked out very well, it was followed by “The First Lady” and most recently, the highly comedic yet enlightening, “Wives on Strike.” These films have been consistent in displaying the growth of Omoni as a filmmaker. “Wives on Strike” proved many things to us last year and it is that Omoni is a fantastic writer and also a fantastic director.

3. Blossom Chukwujekwu: Blossom takes the bad guy role here very seriously; at least from the film trailer we see this. He is ruthless and ready to cause heartbreak to every female he comes in contact with. From the film trailer, he looks good, sounds good and his acting is always good. He is one of the reasons we have Okafor’s law on our radar.

4. The Storyline: Have you heard of the Okafor’s theory before? That if a man sleeps with a woman, he can do it over and over again? It is my first time hearing of it and Omoni Oboli promises to give us more lessons on topic. It promises comedy and we can’t wait to understand what this law is all about and why it is causing wild excitement.

Are you excited about the film?  Watch the trailer below and tell us why you will be watching Omoni’s Okafor’s Law?

Previous Post MTV Suga is back! Here is what we will be seeing in MTV Shuga: Down South

Next Post Get Ready To Be ‘Lost In London’ With Uduak Oguamanam!