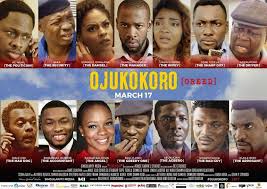 Have you seen Ojukokoro yet? It is an elevating piece of art, a fantastic film released late March and there are several reasons it got such a positive response from audience. The director Dare Olaitan took inspiration from Spike Lee to make a film that keeps traces of its inspiration, but cannot be questioned for lack of originality. That is how you take inspiration from another artistic work; here is why audience loved Ojukokoro:

5. Storyline: The main theme was greed. How greed controls man. 90 percent of the characters we meet are controlled by greed and it is what leads to the downfall of many of them. The lead character, Andrew (Charles Etubiebe) is suffering from lungs cancer; he is the manager of Lubicon. Lubicon is a petrol station and the bag of money he targets is needed by other people. That bag of money causes the death of many people that are after it. Ojukokoro goes around in fantastic circles. It is sustaining. It is a story created for entertainment, but you will leave the cinema reconsidering the choices you have made in your life.

4. Language: Nothing makes Ojukokoro memorable as the diverse use of language. It starts with English, and then Hausa, Yoruba and Pidgin, all come to play. Ojukokoro was made to relate to different people. The language fluctuates. There are scenes that English is the only spoken language, and there scenes we hear only Yoruba. There are subtitles to guide us and the use of diverse language makes Ojukokoro highly enjoyable

3. New Actors: Most of the actors in Ojukokoro are not totally new but they are just starting out. The lead actor Charles Etubiebe is a stage actor and has been in a few small productions, this is his first major role and he makes a splash of it. Other names such as Kunle Remi, Somkhele Idhalama, Zainab Balogun, Shawn Faqua and Emmanuel Ikubuese are slowly climbing the ladder to full-blown recognition in Nollywood. The variety in the film is in employing such young actors and giving them roles that allow them creative flexibility.

2. Spectacular Cinematography: The cinematography is absolutely spectacular. There is a scene in Ojukokoro where Andrew (Charles Etubiebe) is forced to put his head down a dirty toilet. The accountant (Emmanuel Ikubuese) had just used the toilet. The scene is one that should be disgusting but it is handled with mastered agility by the cinematographer. It succeeds in creating excitement, and inciting laughter, instead of disgust.

1. Vulgarity: it is not only the use of different Nigerian languages that makes Ojukokoro special. It is also the use of vulgar language. The scatology in Ojukokoro is properly handled not to disgust but delight the audience. We hear Sunday (Tope Tedela) say really vulgar words but it is to the delight of the audience. It is the way the writer handles the writing. Purely fantastic.

Xplore rates Ojukokoro with a 9/10.

Have you seen it yet? Drop your comments.

Previous Post Movie Review: “Baby Daddy” is a captivating name, all that is needed?

Next Post Femi Odugbemi’s ‘Battleground’ Set To Premiere On DSTV