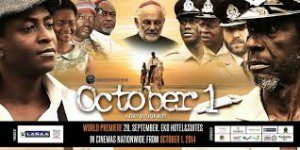 After much publicity and private screenings here and there, the October 1 movie directed by Kunle Afolayan premiered in various cinemas around the nation on October 1, 2014. On the said day, I tried my best to see the movie, but all efforts proved futile as I was either late or the movie had sold out in some cinemas. I had therefore made up my mind, that this holiday was my time to watch the much talked about movie.

October 1 narrates the story of Inspector Danladi Waziri, a police officer from Northern Nigeria who is posted to a remote town of Akote in Western Nigeria to investigate the frequent female murder cases in the community, and have the mystery solved before the country’s Independence Day, October 1.

As it relates to characterization, I questioned the casting of Sadiq Daba as the lead character but asides championing the need for the veterans to show the newbies how it’s done in the industry,  Sadiq seemed equal to the task, delivering to his role, like I have known from his performances in ‘Cock Crow at Dawn’ and ‘Behind The Clouds.’ As Inspector Waziri the Hausa detective with no understanding of the Yoruba traditional systems,  the obedient policeman to his former colonial masters, and as the no nonsense policeman in a town filled with Igbos who felt he was the colonial lap dog and totally biased, Sadiq was true to form and outstanding.

Inspector Afonja played by Kayode Aderupoko was total apt. Too many, he seemed like the comic relief we usually expect from movies, but the undertone of his character was pretty real and is still evident in our society today. I had to do a double take for Corporal Omolodun, played by Fabian Adeoye Lojede. He looked so different from his Jacob Cross character Bayo Abayomi. The shinny, upcoming corporal looking to do more for his country by joining the army, hit home with his character and was upstanding in his right.

While I can go and on about how, the characters totally owned their roles from the colonial masters and the locals, I have to hand it to Demola Adedoyin, the new kid on the block in this production. He played Prince Aderopo and let’s just say I would never have expected this much control for a first timer in a Nollywood flick. Without giving much away, he was remarkable, diction, carriage and that composure that comes with people of his character felt truly real and kudos goes to him. While I foresee some touchy feeling as it relates to the missionary character, Father Dowling (well I’m also catholic) knowing how Nigerians get when they watch our movies and take everything hook, line and sinker, it would have been good to point out that, the production is purely fictional and does not connote activities of that era. Sentiments asides however, the characterization, script and directing come together felt accurate and was truly deep.

As it relates to production, I went in with an opened mind not knowing what to expect and I was not disappointed one bit. October 1 was shot in Lagos and Ondo State for a period of over forty days after four months of preproduction, what does this mean, Mr. Afolayan and his production team paid good attention to details. The production was built for cinemas so picture and sound quality was top notch, the history was so rich adding footage of the Queens visit to Nigeria, the Independence Day speeches from Obafemi Awolowo and Tafawa Balewa, the pictures of the Queen, the President of Nigeria Nnamdi Azikiwe further raised the bar for this production. Costumes were on point, with Deola Sagoe the international acclaimed fashion designer taking the reign for the dexterity and art that went into it and second only to Half of a Yellow Sun. The props were extremely good for a Nigerian production, from the use of the old model cars (although they were left wheel as against right wheel which we used during that era), to the buses, trains, bicycles, bush lamps, touch lights and the alarm clock that didn’t seem to go pass 10:10 (whether am or pm). Time and effort went into setting this up and the team definitely deserve a standing ovation for this.

Script writer Tunde Babalola (Meeting, Last Flight to Abuja) was incredible, as October 1, was much more than just an entertaining feature, it was deep, intense and had that suspense that got us in the hall talking. Asides attention to detail which was evident in the props, Babalola paid as much attention to the script trying to relive the experience of the 1960s and tying it perfectly to the British way of governing us, our tribal issues and our eventual independence. For the man of the moment, I have a new level of respect for Afolayan and I am extremely proud of this production. It was pieced together wonderfully and creatively executed. For Xplore, he has officially become my best director in Nigeria.

October 1, is a must see for all in fact I believe it should get a Presidential screening and earns a whooping 9/10 from Xplore.

Still shots of the production of October 1 are on display at Terra Kulture; Tiamiyu Savage from today -Saturday from 10am-6pm