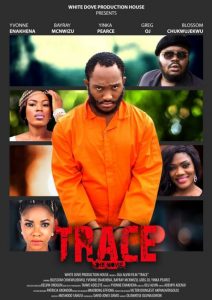 Nollywood actress and filmmaker, Yvonne Enakhena has released the trailer for her new film, Trace.

Co-produced and directed by Olu Alvin (O-Town, Walking in Oblivion), the film revolves around a couple (Yvonne Enakhena and Blossom Chukwujekwu) and how dark secrets from the past come to set a plague on their marital life. The film is set to premiere on the 28th of July, 2017. It stars Yvonne Enakhena, Blossom Chukwujekwu (Okafor’s Law), Bayray Mcwizu (The Visit), Gregory Ojefua (Stormy Hearts), and Yinka Pearce (The Johnsons).

Yvonne Enakhena is known for her role in Ojuju, a 2014 zero-budget zombie-thriller written and directed by C.J. Obasi. The film star Gabriel Afolayan, Omowunmi Dada, and Kelechi Udegbe. It premiered at the 4th Africa International Film Festival, where it won the award for “Best Nigerian Movie”. It also won trophies at the Golden Icons Academy Movie Awards and the Best of Nollywood Awards.

Speaking on her new film and the industry, Yvonne Enakhena said, “Trace is a movie everyone can relate to and the message is timeless. I can’t wait for the whole world to see it.” The film was shot in Lagos and the screenplay was written by Adeniyi Adeniji.