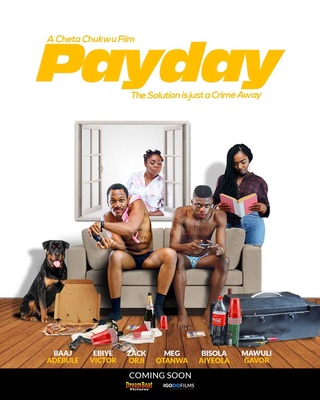 Film Producer and Director Cheta Chukwu has released the trailer of “Payday” her movie which is set for release this Friday.

On the 3rd of July, Cheta held a private screening at the Genesis Deluxe cinemas in Maryland, Lagosfor his new film.

Meg Otanwa and Baaj Adebule who are featured in the new film were in attendance at the screening. “Payday” was initially slated for release in April but there was a change of date.

Payday” follows the story of two best friends and flatmates, Paul and Ortega, who before they are about to renew their yearly rent, their Landlord dies very suddenly, and seemingly without any heir apparent.

The young men seize upon the unfortunate but good opportunity to ‘enjoy’ a little.

They go on an expensive night out. Unfortunately, the Landlord’s daughter turns up the following morning and gives the boys 24-hour notice to pay up or quit.

They embark on an overnight scheme to recover the rent, leading to a dangerous encounter with an eccentric drug baron, a desperate robbery attempt, a gambling adventure, and an ego war with the neighbourhood bully, Orlando.

All the while they were hounded by Ngozi, the neighbourhood gossip, who just wants a piece of the action.

“Payday” is produced by Orwi Manny Ameh, written and directed by Cheta Chukwu

Watch trailer and tell us what you think.

Previous Post 6 Things I Learnt from The #FIRSTBANKDigitalLab Launch!

Next Post Toke Makinwa lands another movie role as Go-Go in “Foreigner’s God”!