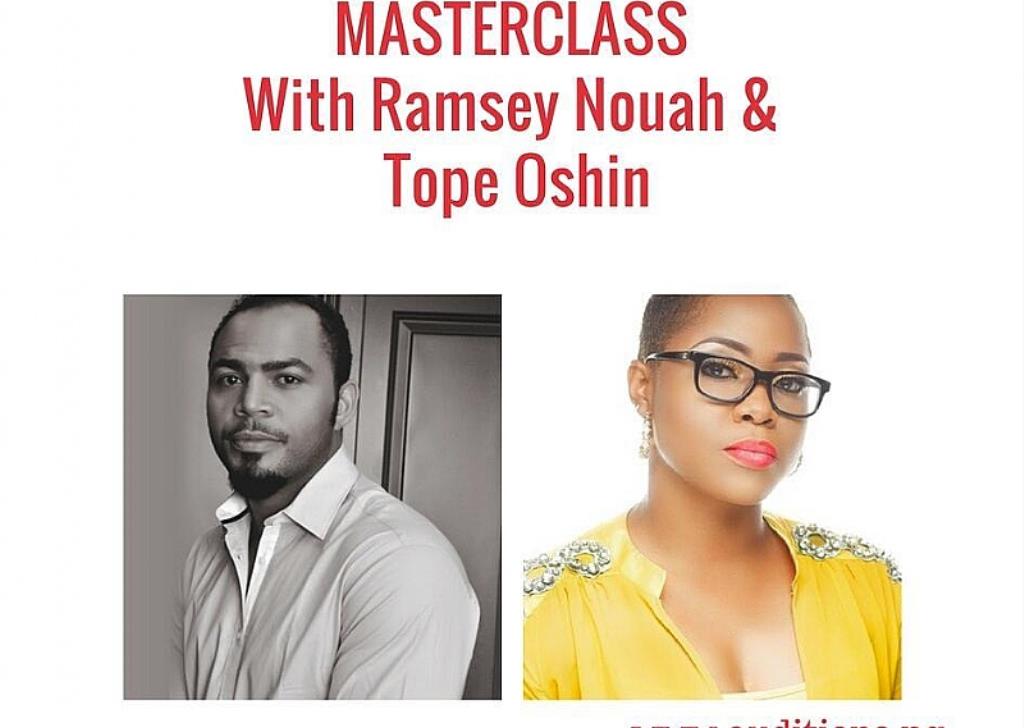 Auditions.ng, an online job listing and casting site for aspiring entertainment people, has recently announced Nollywood heavyweights, Ramsey Nouah and Tope Oshin as the facilitators for its first ever Acting Masterclass.

The Masterclass, scheduled to hold on the 5th of August 2017 in Lagos, Nigeria, will be conducted in an informal and intimate session, where aspiring acting talents will learn what it takes to launch and build a profitable career in Africa’s biggest film industry, Nollywood.

With 27 years of experience in the industry, award winning Ramsey Nouah will share his experience as an actor with talents. After nurturing a successful career in acting since 1990, he decided to expand his portfolio to include directing and producing in 2014, which led to the launch of his movie production company, Ramsey Films. Some of his notable works include: Silent Night (Actor, 1996), Figurine (2009) and most recently, the hit historical movie, ’76 (2014), 30 Days in Atlanta (co-director, 2014), Elephant in the Room (producer, actor, 2012), among many others.

Tope Oshin will share with talents what casting directors and directors look out for when choosing talents for a role, and how talents can hone their skills to be relevant in the entertainment industry.

Speaking on the calibre of facilitators, the Head of Strategy, Auditions.ng, Soyem Osakwe stated that Ramsey Nouah and Tope Oshin are the best fit to roll out the Masterclass arm of Auditions.ng, and launch our talents into an otherwise competitive market.

“We are honoured our facilitators buy into our vision to create thousands of jobs in the creative sector and train 1,000 aspiring entertainment people by end of next year,” she said.

So far, Auditions.ng lists 10,000+ fans on its website and has matched several of its talents in creative job roles across the entertainment industry including acting, modelling, ushering, and many others.

The Auditions.ng August Masterclass is supported by Ramsey Films.