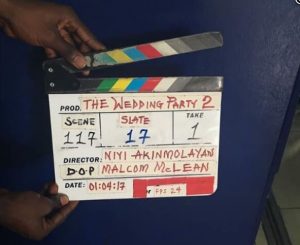 After a successful outing with The Arbitration, Niyi Akinmolayan has been revealed as the new director to the sequel for The Wedding Party. His capacity for repeat comedy and blue-sky romance is not in doubt.

According to the executive producer of the film and CEO of EbonyLife Films, Mo Abudu, the shoot for the film reportedly commenced on the 1st of May, 2017. The movie would be have Malcom McLean as its Director of Photography. A collaboration between EbonyLife Films, FilmOne Distribution, Koga Studios and Inkblot Productions, the prequel grossed over 400 million naira at the box office following its December 16, 2016 release.

In this sequel, Nonso (Enyinna Nwigwe), has continued his romance with Deirdre (Daniella Down), the bridesmaid from London. Nonso proposes while on a dinner date and sets off a chain of events too powerful to stop. Deirdre’s upper-crust British family are against the match, as are some members of the Nigerian clan, but Deirdre’s determination can’t be contained. After a near-disastrous introduction ceremony in Lagos, both families reluctantly agree to a wedding in Dubai, setting us off on another colourful, chaotic and memorable journey to everlasting love. And from the set photos released by the cast of the upcoming movie, Dunni (Adesua Etomi) and Dozie (Banky W), who led the prequel, are expecting their first baby.

Niyi Akinmolayan is known for Meet the In-Laws, Out of Luck, Room 315, and Falling. His 2014 directorial feature, Make a Move (produced by Ivie Okujaye), had three nominations at the Nollywood Movie Awards and two more nominations at the Africa Magic Viewers Choice Awards (both in 2014). His previous feature, The Arbitration, will debut in Paris on the 15th of May, 2017, at the Prince Charles Cinema by 6pm.

The Wedding Party sequel (which is yet to get an official title) stars Adesua Etomi, Banky W, Richard Mofe Damijo, Ireti Doyle, Sola Sobowale, Daniella Down, Ali Baba, Ikechukwu, Enyinna Nwigwe, and Hafeez Oyetoro among others.

Newcomers to look out for include Omoni Oboli, Seyi Law, and Chigurl.

Next Post Cocoa Brown takes Inspiration from Being Mary Jane, with an African Twist!