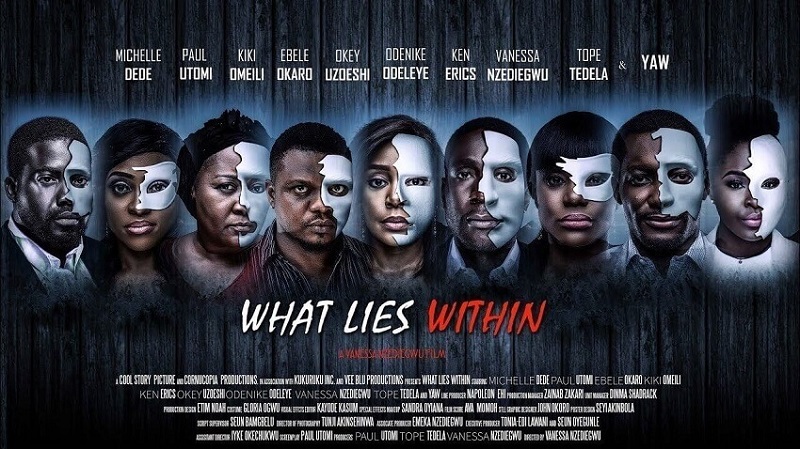 Vanessa Nzediegwu casts and directs herself in a thriller that documents the life of two women in a rut within 24 hours. This should make for an interesting premise, except that it has its loopholes.

Fiona (Michelle Dede) and Barry (Paul Utomi) are pregnant after a long time of trying, they want to share the news with family members and so they set up a family dinner. Brian, Barry’s younger brother is an abusive husband to his pregnant wife Ireti (Vanessa Nzediegwu). When she gets fed-up of the abuse, she calls her sister in-law who suggests that Ireti comes over to her place. When Ireti does, Brian comes after her, it seems like a small problem until it degenerates and adversely affects the lives of Ireti (Vanessa Nzediegwu) and Fiona (Michelle Dede), as well as those of their family and friends.

The most intriguing plot point for “What Lies Within” is what, at first, seems like the murder of Brian. The act is enough to tense us up, and require expectations from its viewer. When the first guest appears, we know that Fiona and Ireti have been involved in a crime. But to what extent are they willing to go to hide this secret? Secrets pile up, and soon, the writer insists on creating more twists this causes slight damages to what is an intriguing story. Brian unexpectedly resurrects. And no, it is no miracle. Unexplained situations flourish and much more. Too many complications does not make a thriller and “What Lies Within,” is here to prove this.

Good acting is a plus for the film. Vanessa’s job as the director does not overshadow her acting. Maybe her dedication to giving a good performance slightly affects her ability to direct the film, because in “What Lies Within,” loopholes exist in the directorial effort. Michelle Bello is excellent, as Okey Uzeoshi is. Ebele Okaro gives the best performance of the ensemble and “What Lies Within” might not come close to the best film of the year, but it makes a solid effort.

Next Post 4 Reasons why you should pay to see “Dognapped”!!!