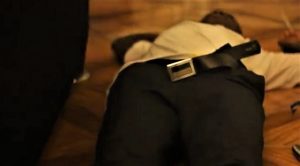 Victim is the somber lamentation of a rape victim. It’s a short film written, produced and directed by Diji Aderogba. It starts with a girl (Bunmi Akins) crying loudly after she’d stabbed her boyfriend to death. He’d assaulted her severally in the past, apologizing later and swearing it won’t happen again. She’d endured the brutal relationship because she’d hoped to change him. Sadly she had him dead instead. It seemed easier to take his life than walk out of the affair (and report it immediately).

According to the location and the wall clock, it was a quarter to midnight and they’d been alone in the apartment. The camera angles, though few, were comforting but not daring. A large part of the set was left unexplored. The camera held fast to the face of the girl like it were a News broadcast. We’re afforded a brief view of the deceased, and behold, no blood. I think I saw a mark of palm oil near his belt. The murder weapon was nowhere near bloody itself. The actress then detailed her victimization and why the boyfriend had to die.

If there’s anything to love about this film, it’s the background music (A Day Without Rain – by Enya). Nothing else could have been more appropriate for the scenario and story-line. Colors and video clarity get a plus, forgiving an ugly skip in the audio somewhere in the fourth minute. Eventually the story ends with heavy knocks on the door. Will she go to jail for killing her lover in self defense, or will the society understand her plight and save her from stigmatization? Perhaps a sequel will tell.

Victim turns up the volume on pertinent issues focusing on rape and domestic violence. The film is rated 5/10 for it’s clarity, sympathy, and directness.

Next Post Movie Review: ‘One Long Day’ Fails To inspire