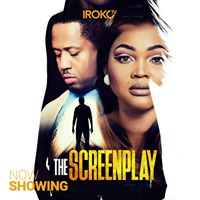 Have you ever fancied watching a story acted out as it is being told? It happens in “The Screenplay” and it is exceptional.

A script-writer has a script to write, she does not do this in time and her manager calls to remind her to complete writing the script because there is a deadline to meet. Unfortunately, she deals with the evil that most writers deal with- writers block. She thinks of stories but cannot come up with any. When she finally thinks of an idea, she proves to us that experience, sometimes is the best teacher, and mostly, it can be a great inspiration too.

Her story– an ex-couple, Pamela (Mercy Aigbe) and Kenneth (Mike Ezurounye) wake up in a club. They are also stuck. They have no idea how they got into the club but they blame each other. There was a party at the club, and everyone is gone, but they are stuck in the club. Apparently, they got divorced holding a lot of grudge, he cheated with her sister, and as revenge she took all of his money. They spend the better part of their time blaming each other for the misfortunes that have enveloped their life. The first few minutes engages us on how the couple has lost a lot due to past mistakes. When they cool off, the person behind their kidnap takes over, giving them a speech on morality.

He challenges them by asking them to do strange things, like providing them with guns to shoot each other. These guns are without bullets, but it is a test. He also provides them with poisoned food and electrocutes them when they argue about a subject.

The first few scenes of the film keep us eager. There is a switch in scenes, we see the screen writer as she thinks of more stories, and we also watch her story happen. The Screenplay has an interesting name and it is also a great film. It does a good job of sustaining us mainly with two characters that argue. Mercy Aigbe and Mike Ezuronye serve as the couple. They engage us. For a script like this, there are two options, it is either the film is highly engaging or thoroughly boring, for The Screenplay, the writer chooses highly engaging. He provides us with a good story that leaves us eager, tensed and at the end of it all; we applaud the writer for coming up with such a great idea.

Mike Ezuronye and Mercy Aigbe do a good job, they are a greedy couple and when revenge beckons, they end up in a club, dealing with a taunting voice that provokes them to the extreme. The Screenplay is interesting, but there is a problem, while the writer creates, for the greater minutes an engaging story, she confuses us with the last scene. The intention is to create a plot twist, by making the writer the kidnapper of the couple. Very little is done to make the last minutes as engaging as the writer hoped it would be. The last scenes are too congested, several actions, too much explanation that almost take from the engaging scenes. This is easily forgiven because The Screenplay is engaging.

Previous Post Movie Review: ‘Timeless’ proves Love can be found at any age

Next Post Vivian William’s “Unveil” To Be Unveiled this May!