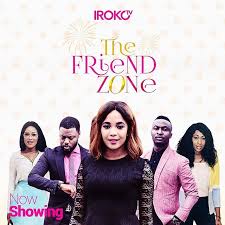 If you want to check our review for “The Real Side Chicks,” you can look HERE

The name of the film “The Friend Zone” should give out what this film is about, but we still watched, and expecting twists.

Ivy (Chelsea Eze) is a focused young woman, successful in what she does, she also supports a grumpy sister Ella (Ebube Nwagbo) and a not-so-nerdy friend Dennis (Daniel Lloyd).

Ivy and Dennis practically do everything together, when he falls in love with a colleague at work, he enlists the help of his best-friend to get the woman’s attention. Ivy helps but begins to consider her own attraction to Dennis. We see slight development to Ivy’s interest in Dennis, but none for Dennis.

Subsequently, Ivy confesses love for Dennis. He is not interested in her, but the scriptwriter wanted a romance story that she thought would make us happy, so in the last scene, she goes all out. With no development to Dennis’ affection for Ivy, he returns to Ivy, and dumps the woman he was interested in and they live happily ever after, as a couple.

“The Friend-Zone” is a highly predictable film, we watched to tell you about it, and while it has some good acting, it focuses on one of the many stories we were told in “The Real Side Chicks.”

Trust us, it is nothing new, you have seen this before.