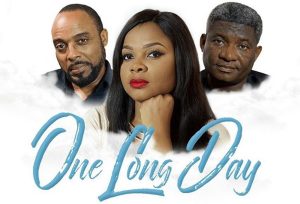 One Long Day is a space of 24 hours crammed with enough complications to ruin a relationship. The day Babatunde (Kalu Ikeagwu) chose to propose to his girlfriend (Bimbo Ademoye) was the day she had to see a client at Ibadan. For possessive and ulterior reasons, she arranges for her cousin (Lucy Ameh as Feyi) to come and keep an eye on Babatunde. But Feyi had her own plans. She intended to have him all to herself by using suggestive advances. Babatunde’s consequent restlessness was much ado over nothing. He could’ve firmly said no to the charade from the word go.

Costumes (by Adetutu Zainab) were looking good till Lucy Ameh (Bariga Sugar) had to wear four outfits in under twelve hours. Her makeup also looked heavy. Modupe’s ex, the plan B for the break up story, was a pain to watch. His carriage and delivery weren’t working for me. Too many scenes were replayed over and over again in the name of flashbacks. A sheer waste of time. The soundtrack too (by Frank Edwards and Remi Benson) was boring. Also, would a guest make breakfast for her host on the morning of her own arrival? Not to talk of serving him, in how many minutes of entering the house?

Jude Legemah’s editing wasn’t the best, like in a scene where Babatunde had to run into a trap looking for a rat. When and how Feyi lands in the kitchen right afterwards (in an unappealing negligee) is still a mystery. In another scene, Feyi records an incriminating video of Babatunde to show Modupe. How the video later modified itself into something else was another mystery. Directed by Efetobore Ayeteni, One Long Day wants to make sense but misses the mark.

The film is rated 2/10 as it has little to no inspiration.