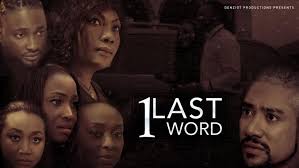 As a Senator, can I just say that I believe Nollywood will be missing a great piece in the person of Desmond and I soooo praise the Lord for his exit! (I kid, I kid, that’s if he doesn’t combine both roles)

“One Last Word” is the second Desmond Elliot production were a character is a director and trust me it isn’t impressive and when that character is Majid, my eyes do a 360 in its sockets. Majid strikes me as a character that is ever ready to work with various directors and he must have a good work ethic, but I have one word for him, acting classes (that’s 2 words actually!) and these classes will help you portray your characters, differently from the usual. And your usual is high pitched screams, I am hard cause I have a cigarette in my mouth and I got played, so I am vulnerable.
If felt different to see Eucharia in this production and I kind of appreciated it. It reminded me of her ‘Glamour Girl’ days, and she deserves some credit. While Abiola Segun Williams speaks with that impeccable accent of hers, she is slowly beginning to sound annoying and doesn’t really have to be in roles that don’t challenge or add anything to her acting profile.
Uru Eke, the self-centered fiancée had me in awe! What is going on Uru? Some roles can actually be turned down, favor or not! The hoity-toity act felt so over-played that there were scenes her pronunciation weren’t clear.  For Uti, who played the role of Chief Medical Director, OMG, what were they thinking? Uti felt so out of place and not in the doctor element at all. He also does himself a disservice with his dreads and even if he was playing it up to look like a funky doctor, his mannerism just stood out. He needs to embrace his roles and go all out, as he didn’t do justice to this! I would really like to know what he does to get into character.
As it relates to cinematography and lighting, this aspect seemed to be handled properly, clear scenes, sound quality, okay. The script didn’t feel like much was put into it or its plot, a dying mother, just wanting to be surrounded by her son, change to wife material search, the shallow twist at the end felt too melodramatic to be real. Before I forget, whose idea was it to color or should I say add powder to Majid’s hair and not dye it? Would that be costume or make-up?
One Last Word, felt like a movie horribly put together by Desmond’s production studio before swearing in and earns a disappointing 3/10 from explore.
Have you seen One Last Word? Let me know what you think in the comments section.
No votes yet.
Please wait...
Voting is currently disabled, data maintenance in progress.