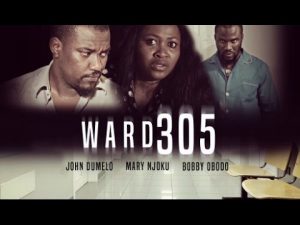 If anything made Nollywood famous, it was the repeated story lines that usually involved wicked step mothers and men sacrificing family members to gain more wealth. Marriage and cultism formed a major part of Nollywood in its infancy; it was intriguing to watch these stories in those days. The industry has gone through a rebirth and today, more stories that are diverse are being created, but it does not stop scriptwriters from taking inspiration from old films. There is no problem with taking inspiration from older films as long as the film turns out good, and Ward 305 is good.

Ward 305 features Emeh (Mary Njoku) a house wife who goes snooping and finds a body part in a safe, her husband Osaze (Bobby Obodo) has kept locked for a long time. The body part belongs to their dead child. A month earlier, the couple had lost their child. Overwhelmed by what she encounters Emeh leaves the house. Eventually, she is knocked out by a moving vehicle. She ends up in the hospital not to be treated for her accident but for mental evaluation. Emeh tries to run from the mental asylum but she ends up being knocked out by a car again, she ends up in a new hospital, and her doctor Goke (John Dumelo) offers her help by making her his personal cook.

Ward 305 is an intriguing film that features occultism as much as it features mental health. Emeh is not mentally unstable; it is a ploy by Emeh to save her life. It is interesting to watch the scriptwriter go deep giving us details on an alleged psychotic patient. Kehinde Olorunyomi writes richly. She explores the medical field, she also crafts an engaging thriller that focuses on cultism. The best part is we only see Osaze and his fraternal brothers in a meeting once. It is a brilliant idea not to stretch that Osaze belongs to a cult. One scene does it.

Kemi puts the character of Goke and Emeh together. Goke helps Emeh to land a job and find stability. He has problems with his girlfriend from when we meet them, and we expect that a romance will blossom between Emeh and Goke, but it doesn’t. Kemi ignores the viewer’s expectation and instead creates a film that satisfies her own appetite, and in the long run ours.

The actors are incredible. John Dumelo is Doctor Goke, while the exceptional Mary Lazarus plays Beatrice his girlfriend that is only concerned about work, and nothing else. Mary Njoku is a good actress and in this role, we cannot help but appreciate her.
Ward 305 is absolutely intriguing and we definitely recommend for your viewing pleasure.