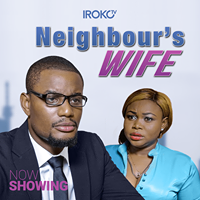 There are very few films that focus on women that are abusive in a relationship. To feature abuse in a Nollywood film means the man is going to be the abusive one. The only form of abuse that exists for women on the other hand, is that they are nags, temperamental, or demanding. “Neighbour’s wife” gives us two marriages as a case study. In one family, the man is abusive, in the other; the woman is the abusive one.

Ifeoma (Ruth Kadiri) is in control of her home. When we first meet her, she is yelling at her husband ordering him on what to do for their young daughter. Her husband, Ben (Alex Ekubo) does not say much. He is a nerd, he wears glasses and has a sluggish way of moving around. A scene that points to his awkwardness is when he calls a female colleague to ask about foundation and concealer, he wants to know which comes first. This is unusual for a man that is married, until we see a scar on his face. It is that scar that he wants to conceal that reveals the domestic violence that exists in his home. He is in denial of this abuse, not because of shame but because he believes marriage succeeds on tolerance.

His wife flaunts her male colleague, Wale (Daniel Illoyd) before him.  She enjoys Wale’s company over her husband’s. Wale is a married man and is also an abusive husband. Eventually Wale and Ifeoma elope leaving their marriages. This gives the abandoned partners an opportunity to bond.

Neighbor’s wife attempts to tackle the problem of domestic violence and while it does this, it fails at delivery. It is interesting to watch the mannerism that Alex Ekubo adopts for his performance as Ben; however, his performance alone cannot sustain the film. The rest of the cast are there not as support systems to each other but to get the script interpreted and to move to the next project. It is evident in the delivery of their roles how rushed the project is.

For the director, Emma Eme who directed “The Screenplay” we cannot blame him for the lack of creative invention by the film. The actors leave the job of creating and interpreting an important story to Alex Ekubo, while he does a good job, the script stretches scenes for too long. Dialogue goes on and on. Many unnecessary scenes make it almost unbearable. It is the type of film that makes you eager for Karma, at the same time; it will tempt you to fast forward to the last scene to know what is going to happen.

If given the opportunity, we will pick out scenes that make watching Neighbor’s wife a burden. Once those scenes are gone, the film will offer a straight forward story that is commendable.

Next Post Cougars Season 3 offers Romance Stories but lack connection between the acts!