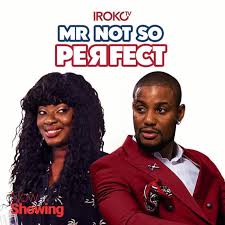 On the iRoko TV portal, more than 70 percent of the films released this year, have Rita C. Onwurah with writing credits. She is one hardworking screenwriter in Nollywood, and she has proven her talent with films such as “Silent Scandal.” Writing all of these films can get too tasking and “Mr Not So Perfect” proves this. In “The Real Side Chicks” and “The Friendzone” all written by Rita, we have a case of similar stories. Those are not the only examples though, “Mr Not So Perfect” adds to the pile.

“Mr Not So Perfect” features Alex (Alex Ekubo) as a no-good young man. He asks proposes to different women and scams them in the process. The circle continues until he meets Oma (Yvonne Jegede) who inherits a billion-dollar hospitality business from her uncle. Oma falls too quick and is on the verge of being scammed, but because no secret is hidden under the sun, Alex gets exposed.

There are a lot of scenes that beg for ignorance to be believed in “Mr Not So Perfect,” one of them is in one of the early scenes where Alex scams a young woman he is engaged to. This woman is portrayed as quite smart, but she is scammed with the ease of a 5 year old. It is tricky to decide if the script wanted to portray women as naïve, because for the majority of the film, we don’t see inspiring women. It is also tricky if it wanted to exalt Alex’s prowess and then his capability to fall in love for a woman he is set to scam. No defined motive in this one, but we told you before.

Stories like this need a lot of work to sustain the audience, and if it would not be done right then there is no need having us watch stories like “Mr Not So Perfect.”

I can’t take back the time I used to watch this, but you can save your time.

Next Post Top 8 Film Making Tips for 2018, from Adekunle Adejuyigbe aka Nodash!