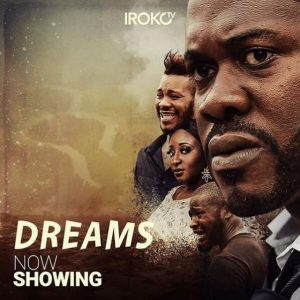 Dreams isn’t just a film, it’s a manual for getting out of poverty through hard work. Produced and impressively directed by Morris Sesay (Paradox, Kidnap), the film leads into the lives of four bottom-of-the-ladder roommates. Deyemi Okanlawon (In Our Trap) plays Segun, the eldest among them whose voice runs a neat documentary in the background. He’s bent on a financial breakthrough, either as corporate carrier or as an artist. Peter (Morris Sesay), one of the four, is bent on leaving the country. Sadly, he falls for a scam and loses his money to Oga Sharp Sharp (Emem Ufot). Jude (Seun Wheels) is a gadget technician who can’t save a kobo due the many women in his life. These women include shady lesbians and those married to matchet-wielding husbands. The fourth, Okey (George Blaq), is an optimist who would rather wait for a job (that never came) than get to work with whatever was available.

In a scene, a letter is brought from the village for Segun, from his mother. With the prevalence of phones, why didn’t she just call him? And even if the letter were so important to the story, the post man should have been at least dressed for the role. Many other scenes were shot outdoors, and thankfully the camera angles served a comfortable background picture, where the market crowd who’d gathered to watch where expertly avoided or blurred. In as much as every second was short of any waste, a bit of time was spent in the beginning with Deyemi Okanlawon riding his bike (Matrix Reloaded style on untarred roads) to a fine rap song by Jay Ocean.

Peter’s travel agent, Oga Sharp Sharp, looked like a fraud from the word go. He was too chatty and too loud to have been given any credibility. Sudden silences in the background music were unwelcome, for half of the time they made it feel like another scene was being ushered in. Peter’s trip to get his visa, and the consequent disappointment, didn’t come off as well as it should have. It failed to draw any sympathy. Or perhaps it’s a plot already overused in Nollywood. Nevertheless, it remained as a clear warning to viewers to steer clear of ‘get-anything-quick’ schemes, whether it be getting rich or getting out of the country.

Peter’s subsequent shoemaker shop, right in front of their home, was well set up. Kudos to Alfred Folorunsho for the props. The bench, the table top with hammers and tools, the bottle of gum, to the finished palm slippers hanging behind him, were all on point. I think Adekunle Gold’s new song, Work, should’ve been part of the soundtrack. Especially at the scene where Segun had to work late into the night to finish an office assignment. Ini Edo (Lipstick, While You Slept) played Jumoke, an office executive, and her performance was okay. Her makeup (by Classie Tabbie) wasn’t out of place, neither were the costumes (by Kemi Adetuyi) on any of the cast, except for the postman mentioned earlier.

In all, the movie is one of the best depictions of how work is the only route to one’s dreams. A must watch for anyone who thinks destiny would come knocking on the door. Dreams is a Believe Media and ROK Studios collaboration. The film is rated 5/10 for it’s straightforward approach and appreciable life lessons.