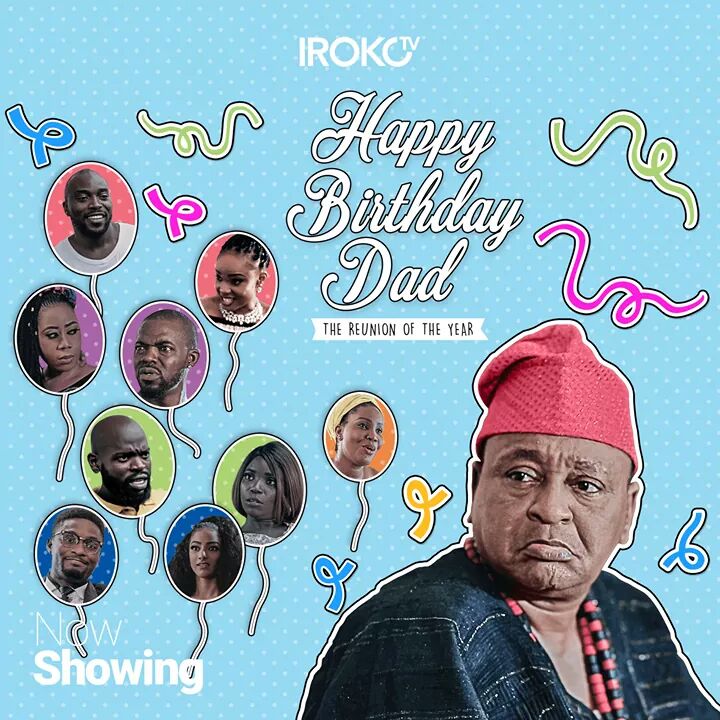 Chief Otumba is about to celebrate his  70th birthday, and his children have to be around to celebrate with their father; after all, he has always been stern, which means there could be a consequence for being absent. There is also a will at stake. Otumba waits for his children in front of his house and when we meet them, we meet trouble. Every child carries a burden too deep for Otumba to handle. Yemi (Seun Akindele) who has claimed to be the most successful is going through a terrible financial challenge and baby mama troubles. Ope (Olakunle Fawole) is an alcohol addict dealing with liver failure, he also insists on moving around with his ex-wife Zodi (Moyo Lawal). Mofe (Adeniyi Johnson) seems like the level headed son, but he does not have a job, and Otumba lacks the patience for this. Mofe also has re-occurring nightmares that does not allow him concentrate on his relationship. Yinka (Emem Ufot) is sterile but somehow he has gotten the house help’s daughter pregnant.

Happy Birthday, Dad, is highly enjoyable and one of those comedies with jokes that are far from stale. In creating a dysfunctional family, the writer takes inspiration from a usually over-flogged plot line where there is a re-union and secrets get spilled but this time around there is an enjoyable twist to the whole process, family does not get broken here, in fact they enjoy the process of hearing each other’s best kept secrets. They laugh at each other and carry on with their lives immediately after.

The Otumba’s are a family filled with “baby fathers” and that alone squashes a derogatory term that has been used to shame single mothers.

The greatness of Happy Birthday, Dad is with its superb and absolutely hilarious cast. Iyabo Ojo appears in the final minutes of the film and she is absolutely hilarious, she is a highly memorable actor.  Jide Kosoko is a true gem. He is Chief Otumba and he is absolutely hilarious as the self-righteous father that gets exposed. Seun Akindele and Olakunle Fawole enjoy a fabulous screen time, they share a sensational chemistry and after watching this, you might find yourself appealing to see them as brothers or as buddies in more films. Both actors are magnetic, and purely sustaining. Moyo Lawal is another reason to watch this.

Happy Birthday, Dad is a film you want to see on a good day, on a bad day, or to feel better on a terrible day. From the first scene it promises wild intrigues and engagement, and it delivers. It keeps to this promise to the very last scene. Chris Eneng gives his cast freedom to enjoy their time on screen and they absolutely have a blast.

Previous Post Movie Review: ‘Single Mum’ explores Marriage & infidelity, but it is not too impressive!