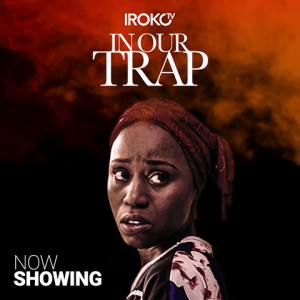 Kelechi (Deyemi Okanlawon) and Onome (Ijeoma Grace Agu) are a very unhappy couple. Kelechi is an abusive and manipulative husband while Onome allows the abuse. She never challenges him, her role as a woman is to be silent and remain a wife, even if the marriage is terrible and not working out. Onome dances to the tune her husband plays and continuously denies the abuse happening in her home to her friends and family.  Even when she ends up in the hospital, she continues defending her husband’s disrespectful attitude. Things only change when he hits their young daughter. Because of their daughter, Onome takes control of the situation in her home. She switches things up, she becomes the one in control, she dresses better while tying up Kelechi and giving him a taste of his medicine.

The story played out “In our Trap” captures the situation of many women in our society, women that are in abusive relationships but are unable to challenge the situation because they are not financially secured or because they are trying to protect the happiness of their children. A happiness that does not exist. In an abusive relationship, there is no happiness, it is only an illusion and “In Our Trap” proves it. Through Onome these women are represented, their stories are brought to the fore. In our Trap offers us a glimpse into the situation of subservience and how it works. It also lays out the problem of control, and how people that love control will not let go or allow others freedom.

When Onome takes control we feel a sense of satisfaction, joy comes from her strength because it can offer inspiration to many women in such situations. The purpose of the film is to point out the disadvantages of staying in an abusive relationship for the sake of your child; the child deserves a stable environment, abuse affects the child as much as it affects the mother, and marriage is not a do or die affair, not when there is abuse.

Ijeoma Grace Agu plays the subservient role; she credits her subservience to her daughter. She does not want a broken home, she is concerned about her daughter growing up in an environment that allows her to enjoy love from both a father and a mother, and so she watches her husband Kelechi have a relationship with a maid, get the maid pregnant, and the only thing she does is poison the maid to lose the pregnancy. Ijeoma does a great job. She is annoying, as well as pitiable. When she takes control, she is also bold in an admirable way. Deyemi Okanlawon is also highly sustaining as Kelechi.

In Our Trap earns a 7/10 for its bold storytelling.

Previous Post Stanlee Ohikhuare’s “Behind The Wheels” Gets Release Date