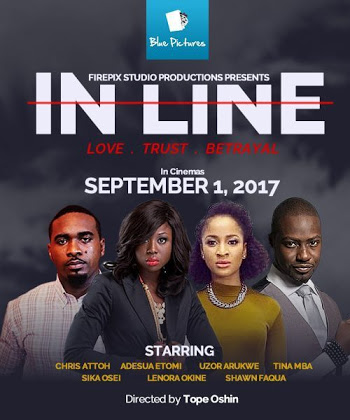 Adesua Etomi has walked her way to being one of the most relevant and sort after actresses currently working in Nollywood. Social media agrees with her, and producers are banking on her talent. This alone should help draw an audience to see her new film, but it doesn’t with “In-Line,” her latest film showing at the cinemas. The director, Tope Oshin, is also one of the very relevant female filmmakers working in Nollywood. This is her first cinema release in two years, but for some reason, her name too, does not quite draw the audience for her new film.

The storyline should have its audience though. It is a good story that follows Debo Devy (Uzor Arukwe) who is convicted and later released for murdering his father. His mother plays a big part in his release. She is influential, and has her people in the political landscape. It is this influence that stirs the insecure Debo. His wife proves her strength while he is in jail by managing their joint business; she keeps it stable, and remains loyal while at it. This is not enough for Debo who has a hard time believing in his wife’s loyalty, and so he goes to his ex-girlfriend, Ama (Sika Osei). She is given a job to spy and bring her findings on Kate to Debo.

Do we trust Ama? After all, she still feels something for Debo. The story escalates slowly, and with each scene, we know that there is more we want to see and for “In-Line,” the magic is in its unpredictability. The writers do not allow us a hint of what is to come, and even though we have our guesses, we do not quite hit it. This is what makes “In-Line” a good cinematic experience – the type that gets you talking afterwards.

Even though the social media handle for “In-Line” is full of life; that is the highest the producer has made an effort to market her story. It is the type of story made for the cinema but should have succeeded with a little push.

“In-Line,” as with many productions in Nollywood, suffers from bad sound but survives good cinematography and an enjoyable directorial effort from Tope Oshin. Its best actor is not Adesua Etomi though; it is Sika Osei as Ama. She is a revelation and leaves us eager for what is to come.