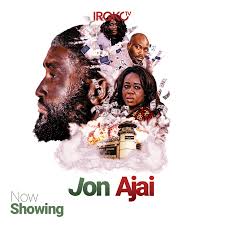 To create a film is to hope that someone, somewhere, will watch and feel connected to the story. The Audience plays a pivotal part in the process of creation, and if the film is not being made for the public, then it would not be released for public consumption. Jon Ajai is released for public consumption but the filmmakers ignore the need to create a film that will resonate with an audience.

Jon Ajai is played by Moses Samuel. He is a fast-rising reckless singer, who, while drunk decides to drive, killing an unsuspecting pedestrian. Jon Ajai is sentenced to 20 Years in prison for the act. He leaves his new wife in the care of his best friend (Seun Akindele).

The period Jon spends in jail is documented but the screenwriter gives little attention to the growth of Jon, who we expected to see experience some sort of reformation as atonement for his recklessness. When Jon is released, he visits his wife and suspects that she must have married again.

“Jon Ajai” starts with a lot of energy. We experience a bar, where a musician is gambling as well as entertaining his audience. The bar has attracted a number of people – and through them, the owner makes a living. While Jon Ajai does not present a totally brilliant script, it makes an attempt at creating an experience of life before and after jail. Even though it gives little attention to the jail scenes, it offers lessons on drinking and driving.

Jon Ajai loses its grip on its audience with the saturation of events in its last minutes. One reason for the lack of interest comes from the prolonged hours of the film. The story would have had a successful run in less than two hours, but unnecessary scenes compile to the minutes.

Desmond Elliot directs Jon Ajai, and it is a different entry to his filmography as a Director. Moses Samuel is an introduction and despite the obvious lip-syncing that characterizes the creation of Jon Ajai, and at first, what seems like a discomfort for the role he is playing, he picks up.

Jon Ajai is screening on iRoko TV and earns a 5/10 from Xplore.