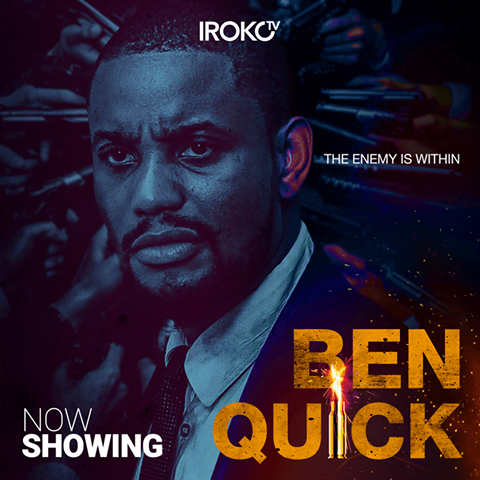 Films with detectives searching for crime perpetrators always promise to bring in the thrill. We love films that promise anxiety and Ben Quick is one of those films, it is intriguing. It is a film for you to watch.

The film starts in the office of the Police Inspector; he is talking to one of his men, Benjamin (Alex Ekubo). There is a duty for Benjamin to carry out, the viewer is not told of this duty but Benjamin visits Chief Briggs who is in need of a new specialist driver. Chief Briggs has just fired his driver due to his inability to protect him during an attack. Benjamin takes the new role and with that he begins to endure the dislike from the family members of Chief Briggs. Chief Briggs daughter, Dorothy (Bisola Aiyeola) dislikes Ben. Chief Briggs brother, Sule (Uche Udopota) launches an investigation on Benjamin, famously called Ben Quick.

The storyline and the dialogue is impressive. The writer keeps us waiting and what we expect of the story is not what we get. ‘Ben Quick” is not predictable, it is sufficiently different. Ben is not too tough, just a relaxed police agent and being in Chief Brigg’s house causes several problems with his daughter. Dorothy is intelligent and uptight and slowly Benjamin and Dorothy develop a friendship. The whole script follows an attempt to investigate someone in Chief Briggs circle that is involved in illegal drugs. Chief Briggs owns a pharmaceutical company and is the first suspect of the police, the Police believe his company is doing a lot of shady deals underground and so Ben is planted as the spy.

The acting is great. Alex Ekubo has been a victim of typecast for so long. He has been recycled in similar roles over and over again. He is usually the pampered serial lover but in “Ben Quick” he does something new and refreshing. In the first scene, his carriage does not represent what we know of the police, for example when he has to salute the inspector, everything falls flat and fails because he salutes wrongly but through the film, he is able to pick himself up and do better. Bisola Aiyeola gives an exotic performance, her diction is great, and her acting is even more fantastic. She plays the reserved Dorothy, we love her, we also loathe her but at the end we pick a stand and it is love.

Production quality is good. It is an Iroko TV production financed by Mary Remmy Njoku and the sound is good and visually the film does a good job. The continuity manager is alert and does a good job.  Information is properly disseminated and there is no rational change in the appearances of the actors or their language.

Ben Quick is rated with a 7/10. You can catch it on Iroko.TV

Previous Post Movie Review: “The Road Not Taken” tell us that domestic violence is okay as long as the abuser is disadvantaged.

Next Post Movie Review: ‘The Blogger’s Wife’ rambles with no definite plot!