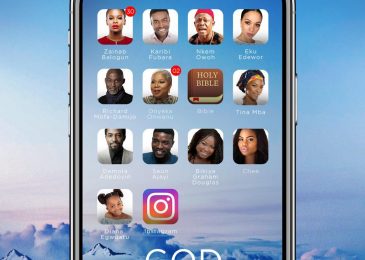 God Calling is a faith based story that looks at the life of Sade (Zainab Balogun) and her family.
Sade the lead character suffers a tragedy that breaks her, leaves her dismayed and guilty, this eventually leads to illusions and a desire to commit suicide. Perhaps the greatest mediator in the film is God, who calls her to be the mother of all nations and takes her on a journey of faith,obedience and self discovery. This call changes everything for Sade and her family.
The actors in “God Calling” did an amazing job. Combining veterans with new faces, the casting balances excellent performances to communicate the story of the film. The child actor, who plays Sade’s daughter does so well in her role. Veteran actor, Richard Mofe Damijo plays a role of an amputee (with only one leg), and pulls this off to the admiration of the audience.
God Calling is about family,temptation,faith,lust and obedience. It is also a film made for faith believers, that God calling us is the best way to be free from the troubles of the world. It takes the audience back to their own low points and inspires them to reminisce on the dark past, but to also believe that a strong relationship with God can be a way out.
God Calling is not an average faith based film. There were so many surprises in the movie, including the explosion of a house, which took a lot of technical planning from the team to pull off. The locations used in the movie,the gospel music,the atmospheric changes are all highlights of this film.
The interesting and thrilling parts were well captured in the trailer but there is still so much to see. The moment when Sade jumps into the river had the audience consumed with suspense. The level of technicality put in this work is highly commendable. Sitting in the hall, I was deeply scared because of the difficulty that committing suicide would cause for Sade’s family.
God calling is a movie that balances great features of art to make a great movie. All the characters fit their roles and make the plot come to life seamlessly. The costumes and the soundtracks are a plus as they enhance the emotions and feelings of the story line. God calling is, therefore, a movie worth watching.
The movie is strongly recommended for those who believe or do not believe there is a God. And also, for those who are depressed,bitter, feel no love or are always sad,This is a great movie that preaches that no matter what has been lost, God is with you and as you adhere to his call you will be free from the worries of life.
Xplore rates God Calling with an 8/10
Rating: 4.1/5. From 8 votes.
Please wait...
Voting is currently disabled, data maintenance in progress.