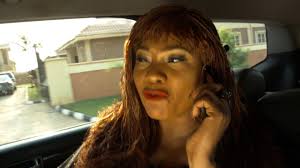 Frank Rajah Arase made “Iyore” in 2015. It was one of the first films he made after choosing to concentrate fully on the Nigerian film industry. Most of the productions before “Iyore” were for the Ghanaian film industry and were quite controversial, in terms of storytelling and the direction used in telling them.

When he decided on making more films for Nigerians, Okawa Shaznay, became his muse. The Cameroon born actress gained a fan base for her resemblance to Jackie Appiah and her  on screen command.  She has featured in “Iyore” and has featured in every other production by Frank, but “Ghana Must Go”.

Frank and Okawa collaborate on films that have fixed the actress in quite stereotypical roles. Most of these features have Okawa as a wife seeking vengeance or doing harm that will bring her vengeance. 2017’s “Soul Tie” was quite inventive but Frank’s first release of the year follows his usual over played narratives.

“Gamble” does everything its name says it will. The story features a married couple that look quite happy until we find that their marriage is a sham. Vanessa (Okawa Shaznay) is the heir to her mother’s casino. Her husband’s father was swindled into creating the casino and lost his life as a result. After getting married to Vanessa, his son decides on a plan to take over the business. Vanessa finds out and in return, she plans how to kill her husband.

The couple end up struggling on who has the best death strategy. “Gamble” tries to be exciting but it does not succeed. It looks and feels like many Frank Rajah’s productions and it does not help that Okawa is in the type of role she is used to playing.

Veterans like Eucharia Anunobi and Tony Umez give the acting bit a fantastic outing. It feels good seeing them back in the game and that is all there is to “Gamble”.