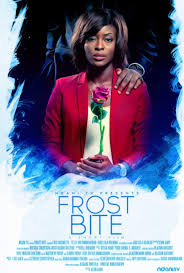 You know how love is portrayed in films; it is mostly perfect and targeted to make even the coldest heart swoon; it is all good, until it gets really bad. In a short movie, there is little time to capture how good love is, but it can be done with good actors. You know short films have the most ability to stir our souls with the most unexpected plot twist and it is what happens in Frost Bite.

Aisha Majek wakes up on her birthday to a lot of surprises. She starts by getting notes, prompting her on actions to take (You know how Simi, the musician, gets sticky notes in her Smile video, it happens the same here). The guy is romantic; he buys her a pair of sneakers, which signifies her love for jogging. With every step there is a new note for her. Even while jogging, this mysterious guy asks two girls to wear a happy birthday t-shirt with Aisha’s name. The only clue we get about Mr. Romantic is that after every note W.A is written. We know that it is his initials and the first minutes of the film focuses on teasing us about him. When we finally see him, his face is not shown to us. And so the mystery continues, until he finally asks Aisha to marry him. Of course, she is elated, and she eventually says yes. After their marriage, we see them waking up together, he asks her to buy gas for the house with a sticky note.

Bill Bidiaqui does a good job in creating suspense and eagerness with Frost Bite. The film happens mostly in silence, it is mostly sustained by the smile and gesture of Aisha Majek. The intention is to get us asking questions, who is this guy? How long have they been together? What will be the major plot twist? It drops this major plot twist by portraying W.A as a broke guy. Throughout the film, we keep thinking, Aisha has hit a jackpot. This guy loves her, and the extent to which he keeps surprising her leaves us with no option but to assume that he must be an oil tycoon. The film leaves us on a cliffhanger. The last way we expect the love story to go wrong is by showing us W.A, full name Wright Akindoju as a broke guy.

Frost Bite is highly sustaining from the first scene. The cinematography is excellent and it is what I enjoy about the effort put into short films. The stories are always great, and so is cinematography. Frost Bite takes the cake for sustaining us with colorful photography. It also shows us Folu Ogunkeye (Popularly Folu Storms) in a small role, but she is impressive. Seun Akindeye does a good job by starting his directing career with a short feature. The film also asks a regular question on wealth and romance, are the most romantic guys the ones without a penny?

Frost Bite earns an 8/10 from Xplore

Next Post From Pageantry to Movie Stardom: 5 Stars that prove, good looks play a part in Showbiz