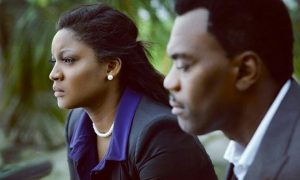 After three years, Omotola Jalade-Ekeinde is back on the screen as Ada Igwe in Alter Ego. The award winning actress who got her first big role in Mortal Inheritance (1995) has starred in about 200 movies. She’s popular for her roles in Ije: The Journey, A Private Storm, Ties That Bind, Last Flight to Abuja, and Hit The Floor. The trailer for the soon-to-be released movie features steamy scenes, a congregation turned upside down, and Omotola in some courtroom action.

Ada Igwe is a fearless human and child’s right activist whose main focus is seeing sex offenders and child molesters put behind bars. Regardless of who they may be in society, rich or poor, influential or peasant, the lawyer is always ready for a court battle. She’s simply bent on seeing all sex offenders in the city punished! Her back to back victories in (and out) of the courtroom leaves her as one of the most revered lawyers in the city. Every other lawyer dreads a legal battle with her. However, there is one person with whom she’s been unable to win a battle against, and that’s Roxy, her other self. Roxy is the other person of high sexual appetite that lives in her whom she constantly tries to subdue but fails repeatedly. That’s the alter ego.

Next Post Hell or High Water tackles the struggle of Identity