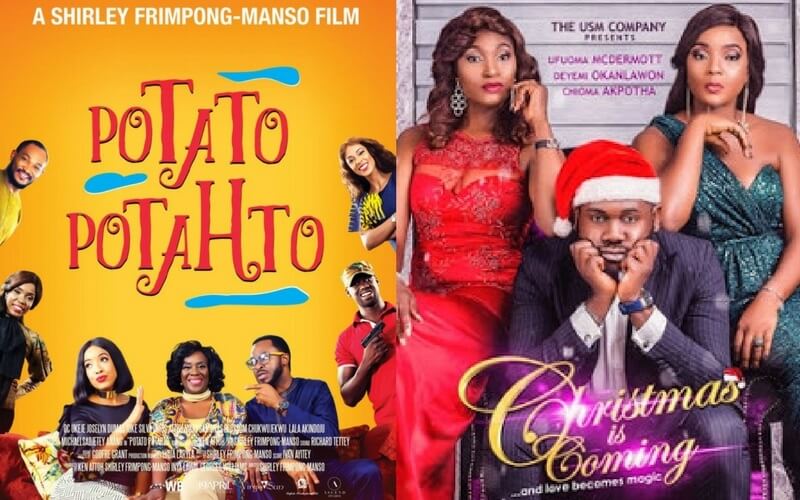 With a new week comes an exciting debut to look forward to. As fresh titles fill up showtimes, others gradually disappear to probably resurface at a festival in the future. This week showcases a list of romantic comedies we can’t wait to lay our eyes on. The highly anticipated “Bandit” has been released, and so has “Potato Potahto”, Frimpong Manso’s latest feature starring the multi award winning OC Ukeje and his co-lead Joselyn Dumas.

Now check out more films showing till the end of November below:

Fred is willed what he feels is a worthless painting by his late Uncle. His friends sell the painting for a cheap amount. He tries to recover the painting after he discovers that his Uncle left him a 90 million Naira cheque behind it.

A romantic comedy about a slobby tomboy who has a string of ill-luck after being transformed to a “lady” by her mischievous flat mates just a few days to Christmas. She unintentionally falls in love quickly and has to deal with the immediate consequences.

A divorced couple who decide to share equal space in their ex-matrimonial home soon realize that the ingenious idea is easier said than done. Bent on flexing their egos and scoring points, the two implore various hilarious tactics that soon inflame emotions and turns an already complicated situation into a roller coaster ride.

5. Bridge of No Return

An illiterate village man with his family are headed to a church summit but their car breaks down. They have no choice but to stay with an unlikely but wealthy family member. With the comfort they experience, will they ever leave their family member’s home to go to their summit or back to the village?

Mano Ojo has to deal with the infidelity of her ‘actor’ husband. This leads to a series of challenges she has to confront and overcome. The challenges soon become too overwhelming to the extent that she loses her poise. Nevertheless, in the midst of her chaotic experience she has to save not just herself, but her estranged husband from his promiscuous stance.

9. Blood in the Lagoon

Against all odds, a young boy, from the devastatingly poor fishing slums of Lagos is determined to pursue the dreams of his brother who is murdered. With no support, but with focus, commitment, hard work, reliance on God and good moral judgment, how far does he go? This film shows at the Filmhouse Cinemas, Marina Resort, Calabar.