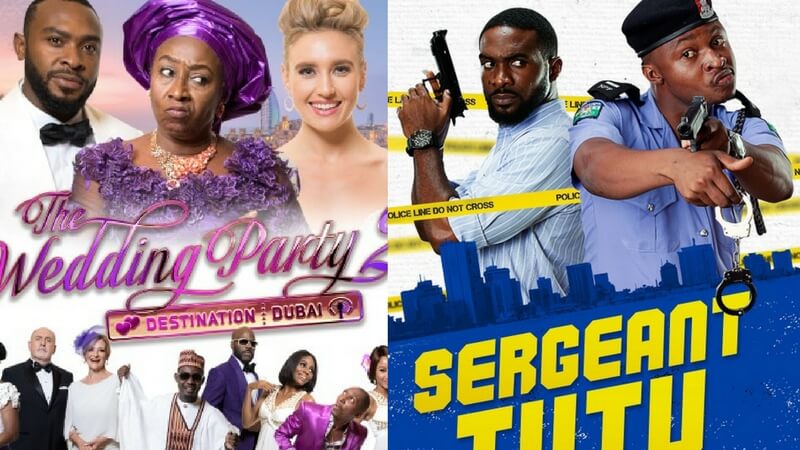 Disguise, Bachelor’s Eve, and EbonyLife’s Royal Hibiscus Hotel are among blockbusters expected soon. Niyi Akinmolayan’s The Wedding Party 2 is currently showing at most cinemas with Sergeant Tutu following closely behind. Uduak Oguamanam’s Getting Over Him, the most recent cinema release, shows at a handful of locations across the country. See below, the full list of Nigerian films showing near you this week:

In this sequel, Nonso has continued his romance with Deirdre, the bridesmaid from London. Nonso proposes while on a dinner date and sets off a chain of events too powerful to stop. Deirdre’s upper-crust British family are against the match, as are some members of the Nigerian clan, but Deirdre’s determination can’t be contained.

The contents of a stolen bag motivates two crooked cops on an investigation that quickly goes downhill.

Mimi finds out her boyfriend has been two timing and she may have been the side chic. Heartbroken she finds solace in a blog that takes her on a step by step guide to finding love again.

A controversial love story set around Queen, a girl born into a decent home who gets lured into lesbianism as a result of her father’s strictness and her mother’s ignorance.

Gary Barbar, Marine Transportation Management teacher is a troubled man. His entire life and aspirations hinge on finding the truth and meaning behind the nightmares, violent flashes of visions of a past that knows nothing about. He expects to find answers as he journeys to his fatherland but he is totally unprepared for the complications awaiting him in Benin as the reincarnation of Ifagbai, the rejected son of Akukuo Eghosa, the great warrior, who must be reunited with his love from time past, Esohe

A thrilling story concerning a young lady who got married to the love of her life. They were never able to consummate their marriage due to the fact that her husband had an issue which they thought was medical.

If you have not checked any of the movies out, make sure you do so now!