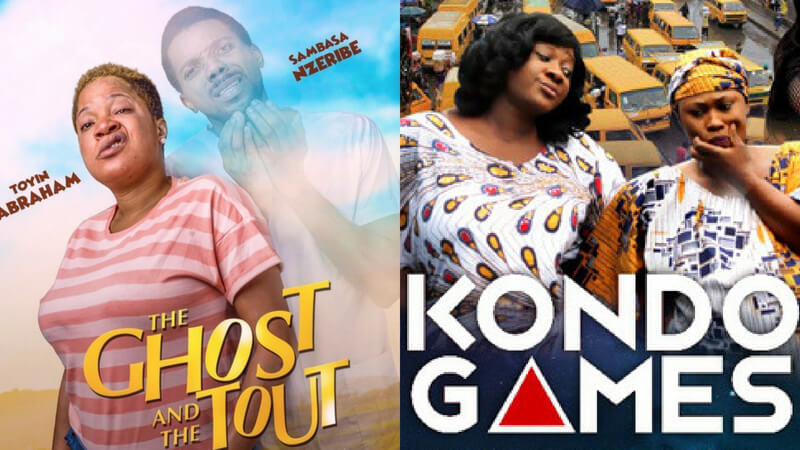 The Ghost and the Tout still shows in most locations even as showtimes for Who?, Divorce?… Not Allowed, and Date Night keep thinning out. Three new comedies, Crazy People, Johnny Just Come, and Charles Uwagbai’s Kondo Games, would be out in cinemas this week. Two of these movies star Funnybone Chibunna, a hilarious addition we’d truly love to see. Come next month and Lara and the Beat (produced by Biola Alabi) will be upon us. While we anticipate this and a few others, here are 9 Nigerian films you should check out this week:

The comic adventure movie depicts life in the police barracks and follows the antics of two notorious police officers, Austin and Vincent who take the viewers on an unending laughter ride.

The hilarious comedy follows an American man, who in his search for love, marries an African woman. The resultant drama explores his naivety to love, marriage, culture and religion. He ultimately discovers marriage to be a learning process where each day brings a different lesson to learn.

Ramsey Nouah as a famous Hollywood star returns to the industry after an hiatus to track down and prosecute his impersonator. With the help of his new manager Lucinda, a fellow inmate while he was confined in Rosewood Medical Centre, a mental facility, he sets out to find the imposter within the circles of the entertainment industry. He discovers producers, production companies even photographers were working with the imposter and no one could tell the difference between the fake and the real Ramsey.

4. The Ghost and The Tout

For the first time in history, an Ibo and Hausa couple will get together and fall in love for a hilarious story that would become a world headline.

A man is held hostage by the woman he brings home for the night and an intense struggle for survival follows.

Previous Post Top 10 Marvel Villains who have made the franchise worthwhile!

Next Post Lola Shoneyin’s “The Secret Lives of Baba Segi’s Wives” is getting a stage adaptation!