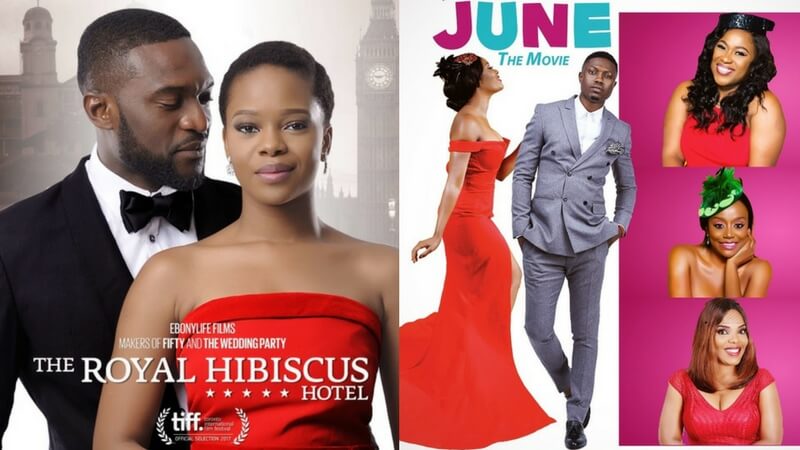 Royal Hibiscus Hotel, Ishaya Bako’s latest cinema release, now shows in 23 cinemas across the country, leading the pack with June in second place. Among directors, Desmond Elliot ranks as the only one with two movies to his credit, June and Getting Over Him. As an actor he appears alongside Jimmy Jean Louis (Phat Girls, Doctor Bello) in the cast of Charles Uwagbai’s Esohe.

Among movie stars, Toyin Abraham appears in three productions this week: Esohe, Wives On Strike 2, and Celebrity Marriage. Deyemi Okanlawon (Royal Hibiscus Hotel, Getting Over Him) and Uche Jombo (Wives On Strike 2, June) follow her closely, appearing in two movies each. Fingers are crossed as we patiently await Rotimi Raji’s Bachelor’s Eve coming on the 16th February, 2018.

See below, the list of Nigerian films currently showing near you:

In this spritely Nollywood romantic comedy, an aspiring restaurateur returns to her home in Lagos to try and refine the fare at her family’s little hotel, only to find that her parents are planning on selling out to a rich (and devilishly attractive) buyer.

June is a romantic comedy that follows a wedding planner played by Michelle Dede who is in search of love but will she be able to overcome the Bridezilla from hell.

A wealthy Nigerian accidentally proposes to his British girlfriend and has to deal with objections from both families and the hilarious cross-cultural consequences.

Contents from a stolen bag motivates two crooked cops on an investigation that quickly goes downhill.

Mimi finds out her boyfriend has been two timing and she may have been the side chic. Heartbroken she finds solace in a blog that takes her on a step by step guide to finding love again.

Gary Barbar is a troubled man looking for the truth and meaning behind the nightmares, violent flashes of visions of a past that knows nothing about. He expects to find answers as he journeys to his fatherland but he is totally unprepared for the complications awaiting him in Benin. It’s a story of undying love, unflinching loyalty, deviously woven intrigues, and traditions.

A controversial love story set around Queen, a girl born into a decent home who gets lured into lesbianism as a result of her father’s strictness and her mother’s ignorance.

A thrilling story concerning a young lady who got married to the love of her life. They were never able to consummate their marriage due to the fact that her husband had an issue which they thought was medical.

The story tells of a handsome player ready to tie the knot with the love of his life. Their relationship is made in heaven, but twenty-four hours to the D-day a dark secret rears its ugly head. Bachelor’s Eve will be in cinemas on February 16th, 2018.

If you have not checked any of the movies out, make sure you do so now!