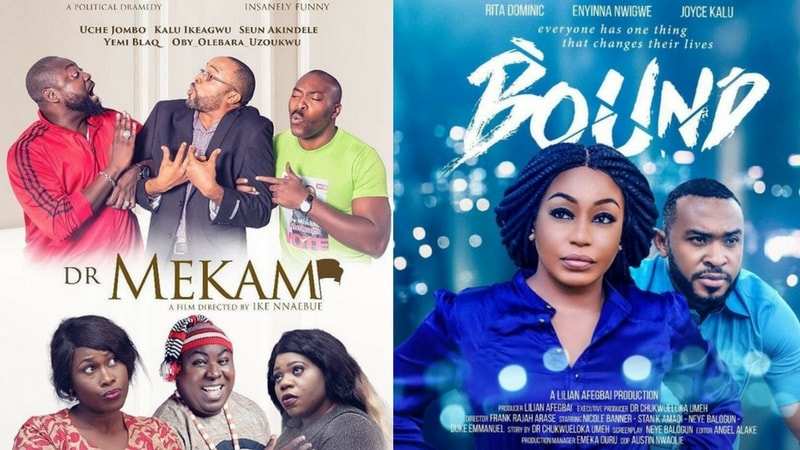 Filmmakers aren’t stepping on the brakes, and since 2018 kicked off it’s been one cinema release after the other. The Eve and 200 Million will be out on the 29th and 30th of March respectively. But before that, New Money will be released this Friday, marking the end of a long wait. Disguise and Mummy Dearest 2 (both of which star Daniel K. Daniel) are currently showing in most locations, beating the more recent Dr Mekam and Frank Arase’s Bound. These and a couple of others (listed below) are part of the 11 Nigerian films you should endeavour to check out this week.

A highly successful diaspora based Nigerian medical Doctor decides to return home and run for the office of the Governor of Anambra state as “a humble stepping stone to becoming the President of Nigeria,” but navigating through the murky and very diabolical waters of the Nigerian politics proves quite an uphill task.

The story follows Chinenye, a single 35-year-old career woman facing pressure from family. She meets and falls in love with Elochukwu, who despite Chinenye’s indecisiveness and fear of commitment, remains in her life with a resolve to show her unconditional love. Unknown to everyone, Chineye has a lifelong secret: She battles spiritual, emotional and physical forces that make her emotionally unfit to commit herself to anyone, no matter how hard she tries.

The movie tells the story of a young man sent to his home town to head his company’s project. Knowing he’s becoming successful in life he decides to propose to his girlfriend. After the move, she begins to assume the position of a prospective wife which naturally does not sit well with his mum.

A millionaire tasks a group of young adults to answer the age old question: ‘What do women want?’ In a bid to win the ultimate prize of N10m, a couple of friends decide to disguise themselves as the opposite sex to find the truth.

In this romantic comedy, an aspiring restaurateur returns to her home in Lagos to try and refine the fare at her family’s little hotel, only to find that her parents are planning on selling out to a rich (and devilishly attractive) buyer.

In the movie, Falz plays multiple characters, featuring in separate scenes as a preacher, a waiter, a lawyer, and a musician. In each scene, he runs into some kind of trouble through which he provides comic relief.

The story tells of four friends experiencing different emotional roller coasters brought about by the pressure, frustration and agony that most unmarried ladies within certain age brackets face in some parts of Africa. It tells the story of how some were able to withstand the storm and how some found strength in their fall.

The story tells of a woman who starts seeing a man from her past as people think she’s going insane. The lines between reality and the subconscious become blurred and her nightmare becomes her waking life.

The story is based on an incredible true life story of a young girl trafficked to London for domestic servitude. This movie seeks to raise awareness and educate Africans in Diaspora and at home on modern slavery.

The story tells of a handsome player ready to tie the knot with the love of his life. Their relationship is made in heaven, but twenty-four hours to the D-day a dark secret rears its ugly head.

The movie tells the story of a young girl, who goes from being a shop girl to a billionaire, after her father leaves her his empire to run.

Next Post 5 Things You Need To Know About Faraday Okoro’s ‘Nigerian Prince’!