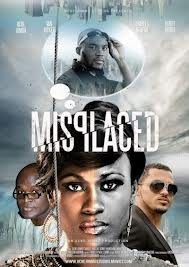 From the stables of Uche Jumbo productions comes the (not sure what genre I can place it) story of Debbie and Jide Adekoya,  a wealthy suburban couple, played by Uche Jumbo and Charles Okafor. Debbie is an aspiring poet/writer while her husband is a stock market analyst and businessman.

The movie also stares Bobby Obodo an upcoming Nollywood hunk that’s gracing our tubes as well as Van Vicker. Osa Imasuen played by Bobby Obodo, is hired by Timi, Van Vickers character to steal an iPad ( In the world of organized crime, I know people pay to have robbers steal stuff but armed robbers to steal an iPad, com’on) from Jide Adekoya  that supposedly holds the key to Timi’s professional career.

Now where do I start from, maybe the story line. I must hand it to Uche; she is indeed trying to carve a niche for herself in the industry, producing movies and staring in them but I must say, I was a little disappointed as the script lacked that seasoning that will make it a good movie. It felt like either the director didn’t want to push the actors to the limit or probably felt it was better to keep it simple as in, extremely simple!

For Debbie’s character (played by Uche Jumbo) who wasn’t satisfied with her marriage because of the lack of emotional or romantic capabilities of her husband, when Debbie eventually found the love she lacked in Osa, she was too lackluster to be real, holding back way too much and totally deficient in conviction that she was actually going to leave her husband for another man.
As for her husband, Jide played by Charles Okafor (I believe this was his comeback role, as he has been visibly absent from Nollywood) OMG, he had nothing new going on, he wasn’t interesting and he couldn’t convince me to buy shares, even if he was the only stockbroker alive!!!The Nigerian movie industry needs to get it, we (viewers) do not need to see all the unnecessary scenes (getting into the car, driving off and all.) let’s focus on getting tighter and imaginative scenes with thought provocative conversations and plots. As far as post production is concerned and adding music or instrumentals (can’t remember the correct term) to the movies, why is it that we never get that right?
My final verdict to this sluggish, plotless excuse of a movie is a D-.