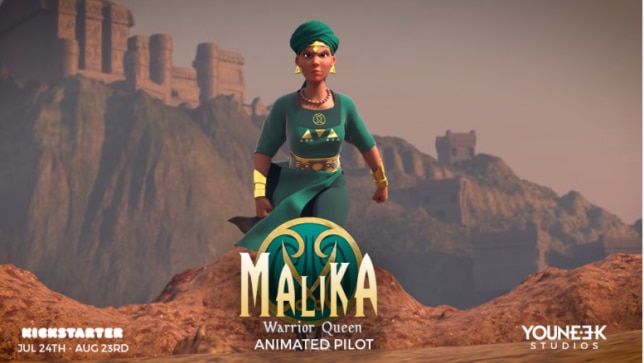 There are hardly any animated films made by Nigerians. However, animation has proved to be a very enjoyable style of filmmaking for  children, as well as adults. The Nigerian audience has gone all out to see animated features such as “Frozen” and “The Jungle Book”. These films have attained success but there is no record of a Nigerian animated film that has been released to the cinema.

This report could change soon because Anthill Studio  and Youneek Studios have launched a new campaign to raise $15,000 for an animated fleek titled “Malika: Warrior Queen”.  The money is supposed to cover production costs on the project.

Set in fifteenth-century West Africa, Malika: Warrior Queen follows the exploits of Queen and military commander, Malika, who struggles to keep the peace in her ever-expanding empire.

Growing up as a prodigy, Malika inherited the crown from her father in the most unusual of circumstances, splitting the Kingdom of Azzaz in half. After years of civil war, Malika was able to unite all of Azzaz, expanding it into one of the largest empires in all of West Africa.

But expansion would not come without its costs. Enemies begin to rise within her council, and Azzaz grabs the attention of the most feared superpower the world has ever known: the Ming Dynasty.

As Malika fights to win the clandestine civil war within the walls of her empire, she must now turn her attention to an indomitable and treacherous foe that plans to vanquish her entire people.

Though a fictional setting, Azzaz is surrounded by actual African states and rulers: bordered to the south by the Oyo, Nri, and Benin Kingdoms; to the west by the Songhai Empire and Timbuktu; and to the east by the Kingdom of Kongo.

You can fund the series by visiting: https://www.kickstarter.com/projects/44069577/malika-animated-series-episode-one-pilot.

Next Post “From Lagos with Love”: This is what you should know about the movie slated for August release